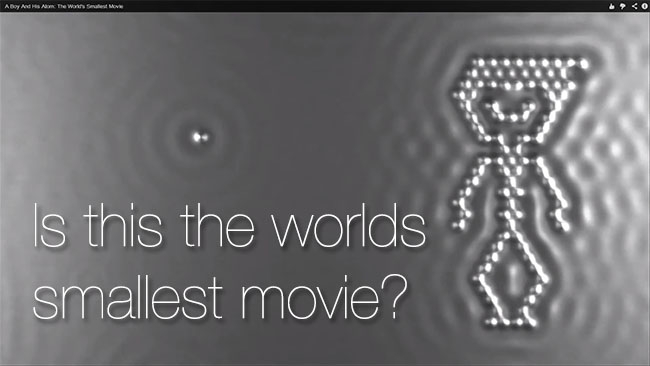 A Boy and his Atom

Researchers at IBM's Almaden Laboratory in San Jose, California have used a scanning tunneling microscope to move atoms and create the frames of a stop motion animation

OK so it's not going to win any Oscars but "A Boy and his Atom" is a remarkable technological achievement. It took 10 days of 18 hour sessions to manage to move carbon monoxide molecules (so technically two atoms) into the correct positions to create the images that are used in the movie. There are 242 individual frames in the movie.

The surface that the carbon monoxide molecules were on is a frame measuring 45 by 25 nanometres. (A nanometre is a billionth of a metre) The scanning tunneling microscope weighs two tons and operates at -268 degrees Celsius, that's just above absolute zero.

So what is the point of all this? According to IBM:

The ability to move single atoms — the smallest particles of any element in the universe — is crucial to IBM's research in the field of atomic memory. But even nanophysicists need to have a little fun. In that spirit, IBM researchers used a scanning tunneling microscope to move thousands of carbon monoxide molecules (two atoms stacked on top of each other), all in pursuit of making a movie so small it can be seen only when you magnify it 100 million times. A movie made with atoms. Learn more about atomic memory, data storage and big data at http://www.ibm.com/madewithatoms