These moon landing tapes are worth at least $1 million 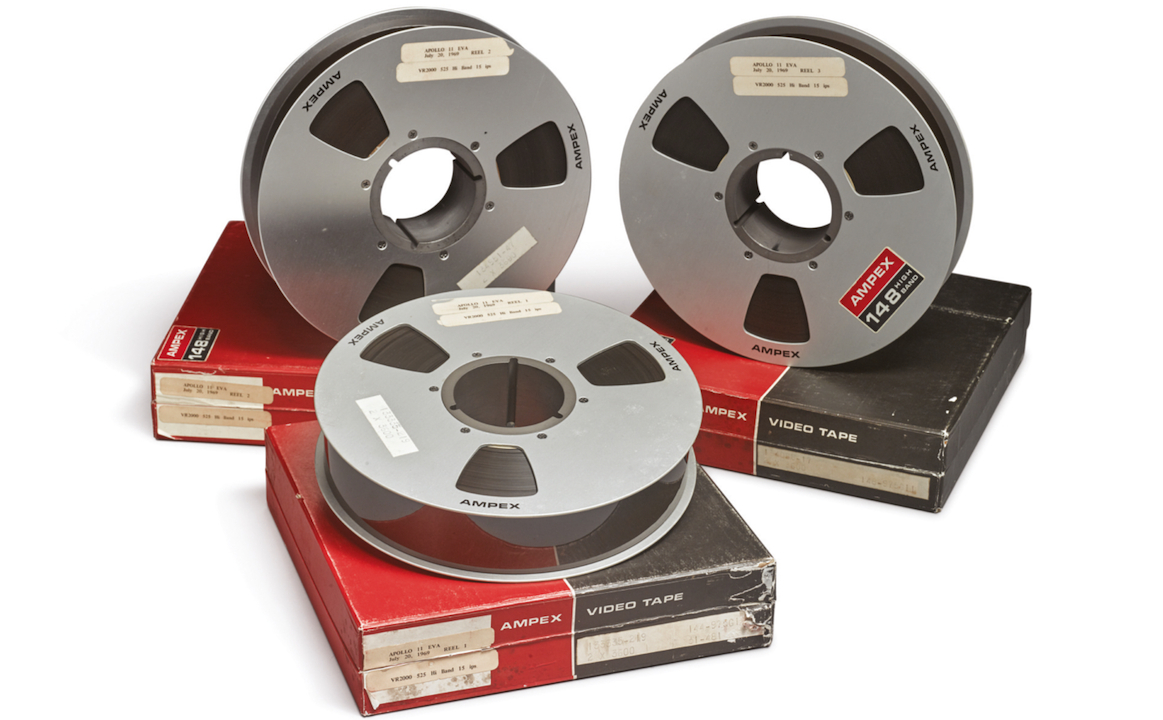 $1 million seems lot of money for three reels of 2-inch metal tape, but these might show the best footage of the moon landing most people have ever seen.

With the 50th Anniversary of the Apollo 11 mission underway, interest is peaking once more in all things related to that first, historic moon landing. And, inevitably, one of the stories that is circulating on both the sane and the more unhinged versions of the internet is the story of the lost tapes.

We’ve covered this extensively before (see Did someone wipe the moon landing tapes?), but the whole story is being given some added frisson this time round by the discovery of some first generation recordings that are being sold at Sotheby’s on the actual anniversary of the landing itself (July 20). The estimate is that they will go for between $1 million and $2 million. As of six days before the auction there is already a bid of $700,000 lodged.

Indeed, so great is the interest in the story of the lost tapes this time round that NASA has already had to put out a statement saying that there are no lost tapes showing previously unseen footage. Everything transmitted from the moon in July 1969 was a) seen and b) has been recorded. What makes these Sotheby’s tapes different is that they’re at least one if not more generations closer to the original slow-scan transmissions than the converted footage that was seen in the world’s living rooms after multiple transmission hops.

It’s not new footage, but it could be better quality.

The crux of the Did someone wipe the moon landing tapes? article is that getting the live transmissions back from the Apollo 11 landing was complex and used a special 10fps format and cameras. This was recorded at three earth stations on one-inch tape as well as being converted for broadcast and uplinked by satellite to NASA in Houston. From there it was then sent 1600 miles to US broadcasters in New York via a succession of microwave transmission towers and from there to the world.

The quality of the images took a significant hit at each stage of the process. The best image quality of all would have been from the one-inch tapes, but despite a lengthy hunt it seems that they were accidentally degaussed and reused by the Agency at some point in the very early 1980s (a common practise at the time). You can see below the difference between what the average viewer saw, on the left, and the picture on the right; a 35mm photo taken of a monitor at one of the earth stations, Honeysuckle Creek in Australia, during the EVA.

NASA hunted down a load of material and commissioned Lowry Digital to restore it in HD for the 40th Anniversary a decade ago. This ‘new’ footage included material taken from CBS In New York, and material captured by kinescope — effectively pointing a film camera at a monitor — at Houston itself. So, in theory, the tapes about to be sold at Sotheby’s — and trumpeted by the auction house as ‘first generation’ — will be the best quality we have seen yet.

There is a note of uncertainty about all this though. And, as with anything to do with the moon landing tapes, the story of how they came to auction is worth telling. In 1976, a NASA intern called Gary George bought a single lot of 1150 reels of magnetic tape at a government surplus auction for $217.77. Given that a new reel of 2-inch Ampex tape then cost around $260, his plan was to sell them to local TV stations for reuse and make a tidy profit.

Fast forward 32 years to 2008 and a Texas ski club (yes, really) colleague and NASA video engineer mentioned the hunt for the original moon landing tapes, and George was put in contact with NASA. However, reading between the lines of the Sotheby’s listing on this score, an agreement couldn’t be made on their value and, in the end, George had them played twice at a Burbank specialist facility; once to see what they looked like and once to digitise them onto a 1TB hard drive.

The hard drive is included in the auction.

They have not been played since, at least until Sotheby’s specialists viewed them to confirm their quality. And, apart from the listing that says that in October 2008 they “were in faultless condition, displaying a picture quality superior to any other existing contemporaneous videotapes” that is all we know.

How good will they be? It’s difficult to say. People can point to that word ‘contemporaneous’ and the date and suggest that they might not be as good as the Lowry Digital restored footage that came out the following year. They might even be brought by a private collector and disappear from their brief public view once more and we may never get to see what quality they are.

Either way though they tell a good story: one regarding how technology has moved on massively over the past 50 years on the one hand when we look at video, recording mediums, computing and everything about how those images were captured; and, on the other, one where we look at the towering achievement of the moon landings and realise how our ambition, at least as far as the manned exploration of space goes, has been lot more static for close to five decades since.