We now know a lot more about AMD's Navi at E3

Dr. Lisa Su, President and CEO of AMD, gave a keynote the day before the event opened where we heard more details about their Zen 2 architecture and we also learned about a 12-core Ryzen 9 3900X that will sell for USD $499. Take that Intel Core i9-9900K and your GBP £500+ price tag.

Throughout the week of Computex we saw dozens of motherboards with the new X570 chipset that supports the Ryzen 3000 family and were also bombarded with information about PCI Express 4.

It was notable that Lisa Su said very little about Navi graphics at Computex however that changed during the AMD event at E3 in Los Angeles.

We already knew that AMD would be launching Ryzen 3000 on 7th July (7/7/7nm geddit?) and that Navi would launch during July. During E3 we learned that Navi will also launch on 7th July and will be sold as Radeon RX 5700 with figures that suggest it will be competitive with Nvidia RTX 2070 with a price of USD $379.

There will also be a Radeon RX 5700 XT with more Stream Processors running at a higher clock speed with a price of USD $449 that may or may not approach the RTX 2080 in terms of performance. Tech companies love to follow the Apple gambit where they announce ‘But that’s not all’ which in this instance is Radeon RX 5700 XT Anniversary Edition which boosts the clocks fractionally higher and will sell for USD $499. Perhaps the most interesting point about the Anniversary Edition Navi is that it will only be available through AMD’s own web store. This approach has worked well for Nvidia and it makes sense for AMD to grab a chunk of margin for itself. 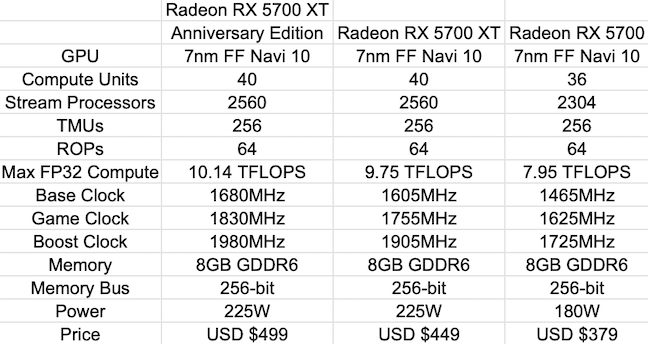 Should creators care about Navi? That is impossible to answer at this stage but my initial instinct is to answer ‘Perhaps not.’ These Navi 12 parts appear to be the top of the tree with mid-range and budget Navi 12 due to follow. In terms of outright performance Nvidia is likely to retain its crown and the new 7nm fabrication process used by AMD looks to level the playing field when it comes to power draw. That should be an improvement over Vega56/64 however we were hoping that AMD would be able to compete with Nvidia while offering a lower power draw.

AMD is quoting Base Clock and Boost Clock speeds and has added a figure called Game Clock which sits between the other two numbers. That sounds like a ‘Full Load Clock Speed’ but the fact AMD is focussing on games gives me further reason to wonder about the appeal of Navi for creators.

One other big change with Navi is that AMD has built on its GCN (Graphics Core Next) architecture and has added something it calls RDNA. GCN works well for compute heavy workloads but is less able when it comes to gaming. The presentation given by AMD suggests that RDNA will be able to run gaming code at double the efficiency of Polaris/Vega graphics. This may be very big news for gamers – we need to use the hardware to be sure – however it promises nothing extra for content creators.

I have little doubt that gamers should be looking to buy an 8-core CPU as that will give them sufficient grunt to get them through the next few years. I am less clear about the value of 12 and 16 cores for gamers, and this is simply because we don’t know the sustained clock speeds for these CPUs. There is a significant gap between the Base Clock of 3.6GHz-3.9GHz and the Turbo Clock of 4.4GHz-4.7GHz (ignoring the weedy Ryzen 5 3600). If, for example, the Ryzen 7 3800X can run all day at 4.2GHz or 4.3GHz then we are looking at a useful improvement over Ryzen 7 2700X. On the other hand if Ryzen 7 3800X can only run at 4.1GHz it will be hard to see what benefit is derived from the new Zen 2 architecture.

Take that thought a step forward and we may see Ryzen 9 running at a sustained speed below 4.0GHz which would hurt gamers, or it may be the case that lightly threaded workloads pound the necessary cores at, say, 4.3GHz while leaving the other cores idling away. Part of the problem is that AMD has said nothing about updates to PBO (Precision Boost Overdrive)and XFR (Extended Frequency Range). These technologies take advantage of your CPU cooling, power supply and motherboard to dynamically adjust CPU frequency at an incredible rate. With Ryzen 2000 we could pretty much forget about overclocking and it is simply impossible to imagine they have made no progress with Zen 2.

It is hard to see what advantage gamers will reap from Ryzen 9, however it is a racing certainty that content creators will take a long look at the USD$499 12-core and the USD$749 16-core and then raise a sceptical eyebrow at Intel Core X at double the price. One possible area of differentiation is that PCI Express support in Ryzen 3000 is limited to 16+4+4 lanes, however that is PCI Express 4.0 rather than 3.0. Even so, we are talking about a single fast graphics card and dual NVMe SSDs where Skylake X and Threadripper support multiple devices with 40+ lanes of PCI Express.

We will know considerably more in four weeks time but right now the winners are likely to be Content Creators who move to Ryzen 9 and that has to be very good news for AMD.