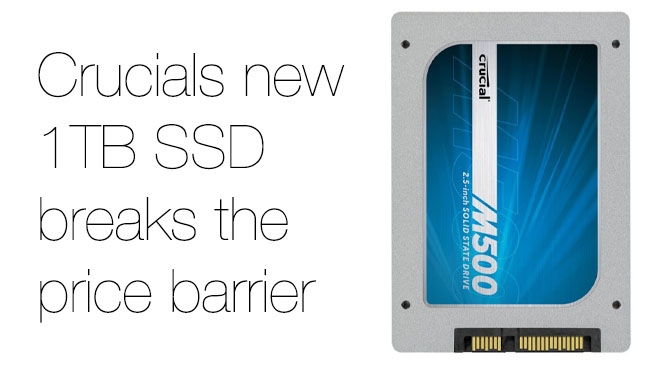 Crucial have released a new range of SSD drives, the M500 series, including a 960GB model which sells for just $599.99

The price of SSD drives has been falling steadily since they were launched a few years ago but they have just taken a giant leap in capacity and affordability.

One of the key parts of the Blackmagic workflow is bare SSD drives. They are used in the Cinema and Production cameras and in the Hyperdeck recorders, these new SSD's promise to increase the available recording time on a single drive whilst at the same time reducing the cost per minute of storage. But be aware that the speed of the SSD's has to be fast enough for the format that you are recording. The 120GB model of the M500 is only rated at 130MBps write speed and the 240GB model at 250MBps, these would not be fast enough for the CinemaDNG RAW files from the BMCC.

However, the 480GB and the 960GB models are capable of 400MBps write speeds which should be enough for RAW recording. We will have to wait and see if Blackmagic put these models on their approved list.

Of course any of these SSD's would be an upgrade from a hard disk in your computer, promising much faster boot times and data access. And I expect it won't be long before we start to see 4TB SSD raid arrays that you can slip in your pocket.