The laptop evolves again at IFA 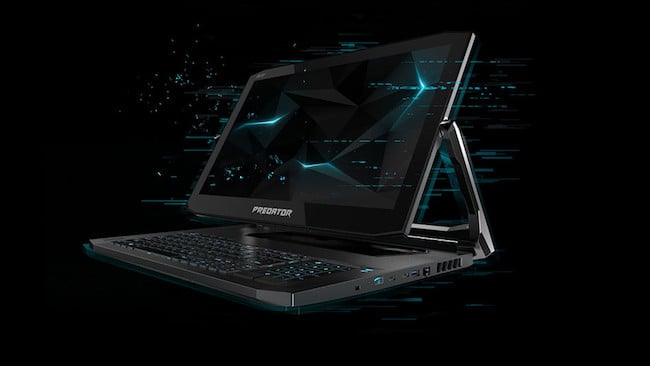 One of the themes of last week’s year’s IFA was some innovative thinking when it comes to laptop design.

While it is sometimes tempting to think of a laptop being just that, a laptop, there are plenty of design tweaks and incremental innovations going on in the field, with last week’s IFA becoming one of the premier events for the showcasing of new designs.

Chief amongst the manufacturers seeking to differentiate their wares was Lenovo who has replaced the keyboard of a normal laptop with an E Ink screen with haptic feedback on its latest $999 Yoga Book.

It’s a neat idea. The Yoga Book already has a 360-degree hinge so that it can be flipped all the way round to work as a tablet, and the pen-supported E Ink screen lets you scribble notes and mark up PDFs. Lenovo tried this last year with a pressure sensitive panel which didn’t really work very well, so it will be interesting to see if the company has ironed out the bugs (not to mention provided a decent spec CPU) with the 2018 version.

That wasn’t the end of its innovations, either. Its flagship Yoga C930 performs the neat trick of installing a Dolby Atmos speaker in the 360-degree hinge, effectively making a mini Soundbar for a laptop. It’s a nice idea, especially given the unit’s ability to be used as a conventional laptop or have the screen flipped round to be a tablet: while the two conventional speakers on the bottom of the unit may be pointing away from you, the ‘soundbar’ will always be oriented towards your waiting ears.

Elsewhere it was all about the bezels, or, to be more precise, the lack of them, with screens pushing closer to the edge than ever before. On the one hand this is allowing more screen for the same form factor, Acer’s Swift 5 for instance managing to cram a 15.6-inch display into what was a 14-inch body; on the other it is allowing for genuinely smaller-feeling models. Asus’ ZenBook 13, ZenBook 14, and ZenBook 15 all looked significantly smaller than before, with the company saying that the ZenBook’s display was occupying 95% of the screen real estate thanks in part to a new ErgoLift hinge design.

Indeed, while the hinge and various connectors will probably always intrude into the bottom of the screen at least to an extent, the only real issue is going to be what to do with the webcam that normally sits at the top. That leads you to either keypad mounted pop ups or — horror of horrors — a laptop version of the smartphone notch.

Lastly, it wouldn’t be IFA without Acer also showing off some form of muscle machine for gaming. This year it was the Predator Triton 900, which followed the 2-in-1 trend with a 4K touchscreen in a heavily engineered swivel hinge. To be able to bring the screen as close to the user as possible, the trackpad has been moved over to the right-hand side, where it sits with a rather neat, switchable-to light-up number pad underneath. Price and performance are not yet released, but expect both to be impressive/eye-watering depending on your point of view.