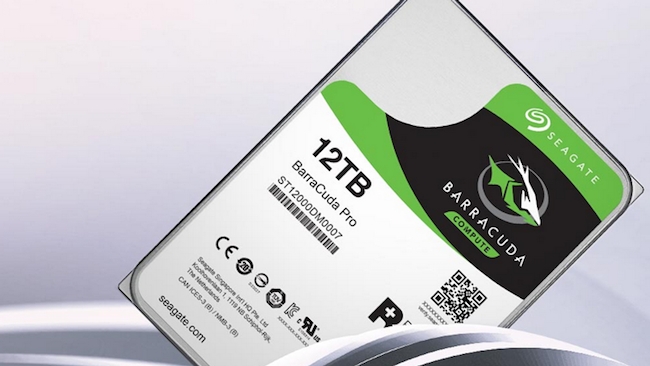 For many years it seemed like the increase in size of desktop HDDs had stalled as people turned to cloud-based services. Two new 12TB drives from Seagate and Western Digital though have reversed the trend.

The new drives are not the cheapest way to buy storage, working out at a shade over $0.04 per gigabyte, when the sweet spot still seems to be at the 4TB level where prices dip as low as $0.025, but they are certainly enormous.

The WD Gold 12TB was launched as part of an expansion of the whole ranges’ line-up, which offered 8, 1 and 12TB drives with a 256MB cache and smaller sizes down to 1Tb with a 128MB one. Top of the range though was the $522 12TB unit, a 7200RPM, 3.5in, SATA hard drive featuring 6gb/s burst data speed and the company’s fourth-generation HelioSeal technology, which essentially encases the drive in a Helium atmosphere. WD says this improves efficiency and reliability to the extent that it can also boast a 550TB/year workload rating.

The new Seagate 12TB IronWolf and IronWolf Pro (which are aimed at the NAS market) and BarraCuda Pro (for the desktop creatives amongst us) have a similar spec, with the BarraCuda coming in at $530. Seagate says the new drives are designed to help absorb data creation demands that will be 10x greater than the current level by 2025, which is as impressive a claim as it is alarming.

That 12TB ceiling is not going to exist for long though. Western is already shipping its 14TB HGST Ultrastar HS14 to enterprise clients and data centres, a unit that uses shingled magnetic recording to balance the demands of greater capacity and speed. They also boast a mean time between failures of 2.5 million hours. With 16TB already in development, expect the 14Tb models to enter the consumer market next year at the latest.