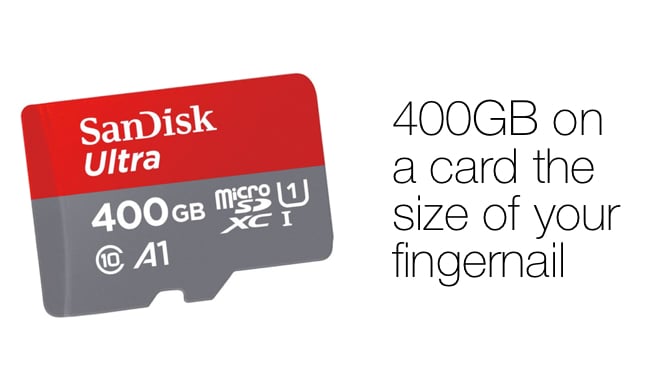 Sandisk raises the bar on the amount of gigabytes you can cram on to a microSD card by a considerable margin, beating its own 256GB record from last year by an astounding 144GB.

Perhaps the most interesting part about the new card though is the price. When Sandisk launched its then record-breaking EVO Plus 256GB microSD card last may, it was priced at $250. This new Ultra Plus microSDXC UHS-I card doesn’t yet have a release date, but it does have the same price: $250.

That’s a per GB price drop of 35.5 cents in a little over a year. Which even if you’ve become inured to the speed of technological progress is fairly astonishing.

Boasting a read speed of up to 100MB/s and an A1-rated performance (meaning you can store apps on the card without worrying about launchtime lag) it looks like the new cards use 3D NAND to get more storage into the same space.

There is no sign of a ceiling being reached anytime soon, with rumours of 512GB cards under development from more than one manufacturer. This will be a good thing too as our editor-in-chief's back-of-an-envelope calculations reveal that you can only store a measly 35 seconds of 10-bit 4:4:4 8K video at 60fps on a 400GB card.