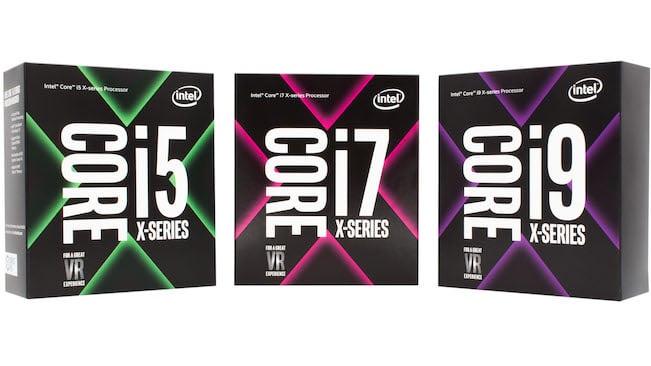 With 12 cores coming in August and 14-18 cores in September, we finally know the details of Intel’s response to the AMD Threadripper threat. Leo Waldock reports.

During the annual Computex IT show in June, Intel announced a new range of HEDT (High End Desk Top) CPUs called Basin Falls that was quite extraordinary.

Historically Intel runs its HEDT CPUs one generation behind the current desktop processors and uses the extra development time to beef up power delivery and performance. The current 7th Gen. CPUs use Kaby Lake technology so it was time for the HEDT to move from 5th Gen. Broadwell to 6th Gen. Skylake X.

Instead Intel did something that was completely unprecedented. For one thing it announced two quad core HEDT models called Kaby Lake X that were nothing more than repackaged desktop processors, and one of those was a Core i5 model that lacked Hyper Threading. These CPUs did not deserve to be part of the HEDT family.

Then we had three Skylake X CPUs, however, the two models with 6 and 8 cores were called Core i7 while the 10 core at the top of the heap was the first model to be called Core i9, with a price of US$999.

This is mighty important as a CPU has a particular thermal package; the more cores you have running at a certain speed increases power and heat so a 10 core runs slower than an 8 core, and a 12 core runs even slower. By that logic, it is unlikely an 18 core CPU will be able to run all the cores anywhere close to the Max Turbo figure of 4.2GHz. An educated guess puts the likely All Core Turbo figure in the region of 3.6-3.8GHz..

In many respects, it is a testament to Intel’s engineering abilities that they were able to respond to Threadripper in such short order, instead of announcing a new development program that would yield results in three or four years’ time.

Intel uses three different CPU dies for its Xeon and Core processors. The LCC (Low Core Count) silicon has 12 internal modules of which two are reserved for the memory controllers so LLC can be used for up to 10 CPU cores.

Next up we have HCC (High Core Count) with 20 modules. Again two are reserved for memory controllers so HCC can be used for up to 18 CPU cores. HCC is the silicon inside the new Core i9s.

At the top of the stack we have Xeons based on XCC (eXtreme Core Count) which has 30 modules and supports up to 28 CPU cores. At present the Xeons with the greatest number of cores top out at 24 cores with a base speed of 2.2GHz and a maximum Turbo of 3.4GHz. If Intel decides to sell a 24 core desktop CPU it will use XCC silicon and the price will likely be north of US$5000.

We also know the 14, 16 and 18 core models will be available after 25th September with a TDP of 165W. Base speeds are 3.1GHz, 2.8GHz and 2.6GHz respectively with maximum Turbo speeds just north of 4GHz, but with no clarity about the All Core Turbo speed.

There is one other point of uncertainty which is that the existing Core i7/i9 models use a poor thermal interface that severely restricts the cooling for these CPUs. We can only hope that Intel’s switch from LCC to HCC silicon will include a proper soldered heat spreader and an end to the limitations we have experienced with Core i9-7900X.