Why AMD’s Ryzen Threadripper is such a big deal 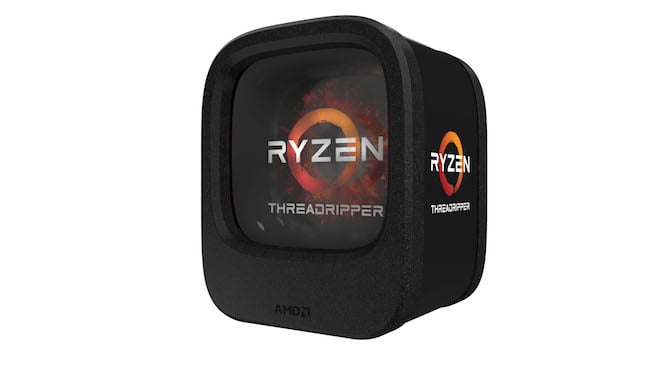 AMD's Ryzen Threadripper: game-changer is word thrown about with increasing monotony, but this could be the real deal

AMD has also announced a third Threadripper called 1900X with 8 cores that will cost $549 with a launch date of 31st August.

The logic behind Threadripper is simple; you take two Ryzen cores, place them on a CPU socket called TR4 (that has the same layout as the SP3 socket used by AMD EPYC server chip) and voilà you have a new CPU that can outgun the latest Core i9 from Intel. If you wondered why Intel has announced Core i9 up to 18-cores (the $1,999 Core i9-7980XE) but has only launched up to 10-cores (the $999 Core i9-7900X) the answer is Threadripper.

For the first time in about ten years, Intel was forced to respond to AMD, in this instance by announcing repurposed Xeons as Core i9 with up to 18 cores.

So what’s the big deal with Threadripper and how has AMD stolen a march on Intel, considering they have a much lower R&D budget? Intel uses monolithic designs so an 18-core Xeon starts life as a 22-core chip (or possibly 24-core) and then some cores either fail during manufacture or are fused off deliberately to achieve the desired 18-cores. By contrast, AMD manufactures the Zen core used in Ryzen in two 4-core/8-thread CCX Core Complex modules and then links them to form an 8-core/16-thread die. Take two Zen dies and link them together on the TR4 package and you have a Threadripper. The 1950X uses two 8-core chips, the 1920X has two 6-core chips and 1900X will use two 4-core chips which are respectively 4+4+4+4, 3+3+3+3 or 2+2+2+2 cores at the CCX level.

This has some significant consequences and also raises an obvious question. The consequence is that Threadripper has double the Input/Output of Ryzen 7 so you get 64 lanes of PCI Express 3, Quad Channel DDR4-2667MHz support and a whole bunch of native USB 3.0 and 3.1 ports. Unlike Intel, AMD isn’t crippling the lesser Threadrippers by disabling PCI Express. If you take the worst case scenario with Intel and plug a Core i7 Kaby Lake X CPU into an X299 motherboard you will find half the slots are dark and do not function but you won’t know which slots until you read the manual and try some plug and play. With Threadripper there are no dark slots and no dark ports. Everything works, even with the baby 1900X which appears on paper similar to Ryzen 7 1800X in terms of cores and clock speeds but which has that doubling of I/O.

The question is if it is so easy to assemble a CPU from two separate dies, why would anyone go to the trouble and expense of manufacturing a massive monolithic core? AMD’s answer is an interconnect called Infinity Fabric which links together parts of the chips with massive bandwidth. They have used Infinity Fabric to connect the CPU and GPU inside their APUs (as found in every Xbox One and PlayStation 4) and are using the same approach both inside Zen and between the Zens to create Threadripper.

On paper Infinity Fabric is not as fast as a monolithic CPU, however, it assists design and manufacture to such an extent that AMD is offering a 16-core/32-thread CPU for the same price as Intel’s Core i9 with tens core and 20 threads. Nonetheless, there is no denying that some of the DDR4 memory slots are a long way away from some of the CPU cores, which means there is wide variance amount of latency. AMD claims to have this under control with strategies called UMA (Distributed Mode) and NUMA (Local Mode) but until we test Threadripper for ourselves we won’t know for sure if they have cracked the problem or merely masked it to a certain extent.

Clock speeds for Ryzen Threadripper are as follows:

AMD has announced the TDP of 1950X and 1920X is 180W and they will announce the TDP of 1900X nearer the time of launch. As a result, you will require a decent air or liquid cooler on your Threadripper, however, the situation should be entirely manageable.

You will also require a motherboard with the new AMD X399 chipset, and the all-important TR4 socket for which you’ll need to budget £350 to £500. Note that TR4 is enormous so the only motherboards listed are either ATX or EATX. I do not expect to see Micro ATX Threadripper boards and I am quite sure Mini-ITX is impossible.

Threadripper 1950X at £999 could very well be the bargain of the year for anyone who edits videos on Windows 10.

Personally, I am very, very excited about Ryzen Threadripper and can hardly wait to see how it performs with Adobe Premiere.