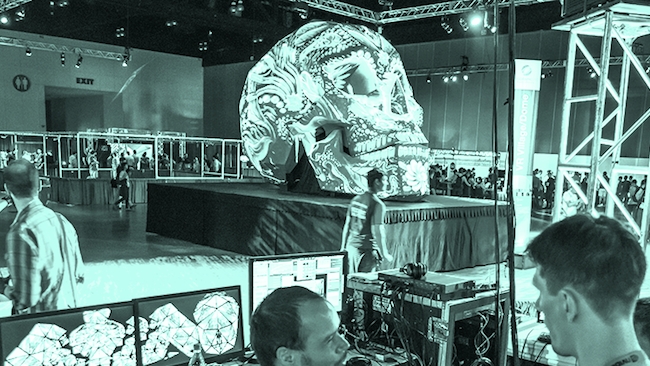 One thing you're guaranteed at Siggraph: plenty of interesting eye-candy

If the content schedule at this year’s SIGGRAPH is anything to go by, it looks like rumours of VR’s death, or at least its entering into a proto-zombie state, are a bit premature.

Whenever I speak to colleagues about the emergence of consumer VR and AR, I get the overwhelming sense that they just don’t buy in, or they proffer a tepid ‘let’s wait-and-see’. Inevitably, conversation ends with a twice-shy warning that we have been here before, citing the 3D project as the spectre of past technology, the Next Big Thing that consumers failed to embrace.

Sorry to break it to you, but whether you’re onboard or not, VR is happening. Immersive experiences are already making huge contributions to developments in art, analytics, gaming, medicine, science, engineering, robotics, space exploration, communication, tourism and transportation. Ironically, the 3D experiment is providing one of the key drivers for VR’s successful implementation - Stereoscopic 3D/360°.

I’ll concede that some of the reluctance is justified. There are still barriers to overcome before we have a genuinely immersive experience, and again a tech solution will follow from current developments in our traditional flat delivery format (TV/cinema/mobile) where the argument for ‘better’ rather than simply ‘more’ pixels appears to have won the day. When HDR/WCG/HFR (combined with ambisonics) are transposed and extended into the virtual realm, that will mark the tipping point when Stereo VR becomes truly compelling and when immersive storytelling will move us inexorably beyond the flat screen.

A reliable barometer of new technology is the prestigious SIGGRAPH Conference. When a technology shifts interest from peripheral to centre stage, it’s a cue to take a serious look. For those who may not know, SIGGRAPH (Special Interest Group on Computer GRAPHics and Interactive Techniques) is the annual computer graphics (CG) conference convened by the ACM SIGGRAPH organisation. Whether you’re in animation, research, product development, film or fine arts and design, there’s nothing like immersing yourself in this world of cutting-edge computer graphics tech. At SIGGRAPH 2017, you’ll find ‘all the data, techniques, people, and inspiration you need for another successful year of research, development, creativity, and production.’

SIGGRAPH is billed as ‘the year's largest, most comprehensive exhibition of products and services for computer graphics and interactive techniques’; it’s a place where the smartest and most talented folk in the industry meet up to imbibe research papers, share information and showcase the latest techniques. As you’d expect, the industry’s established leaders dominate proceedings, but SIGGRAPH is also pleasingly noted as an event that gives space to emerging challengers. Now in its 44th year, and attracting hundreds of exhibitors from around the world, the conference also hosts the international SIGGRAPH Computer Animation Festival; the leading annual festival for the world's most innovative digital film and video creators.

If, like me, conference session titles like ‘Building Detailed Fractal Sets for “Guardians of the Galaxy Vol. 2” and “Rogue One: A Star Wars Story (Jedha Destruction)” give you a fizzy tingle and immediately transport you to your Happy Place, then take note; SIGGRAPH 2017 Conference and Exhibition opens its doors again at the LA CONVENTION CENTER in July/August, and these are just two of the listings from the Production, Animation & VFX Sessions. Highlighting the latest developments in CG and interactive techniques, the sessions will showcase their implementation and use in the real world of feature film production (and elsewhere).

These Production Sessions give attendees the opportunity to question the world's elite computer graphic experts about the challenges and issues associated with complex productions in CG, VFX and VR and the platform on which they can share their processes and techniques. That alone should recommend it to you, but if you need additional information a quick glance through the conference paper titles and exhibitor list will show that this year’s festival is aiming beyond traditional flat screen delivery to present short films and experiences in a new space, the VR Theatre.

The conference’s first-ever VR Theatre will offer attendees a peek into that future where they can explore the fascinating potential of real-time immersion in tomorrow’s virtual and augmented realities. Here we can explore new modes of communication, interaction, and in powering real-world applications in health, art, education, and gaming. Fulfilling the promise of world-class material and technologies, installations also include nomadic (un-tethered) VR & deep-media storytelling with non-linear Light-Field Video. The presentation of Disney Research’s IRIDiuM+ (Immersive Rendered Interactive Deep Media) depicts techniques and the creation process of ‘a deep-media immersive experience with synchronized tactile, audio, and light-field visual techniques’. Rendered Deep Media offers real-time parallax, body tracking and gesture recognition for the ultimate immersive user experience.

That’s all truly next level stuff, but what about now? What are the real-world applications that will resonate with current producers? On a commercially achievable footing, the VR Theatre will showcase the making of “The Antarctica Series: Under A Cracked Sky”. The New York Times VR short film presents unique 360° footage taken under eight feet of Antarctic sea ice, in the clearest water on Earth. Graham Roberts, director of immersive platforms storytelling for NYT notes, “VR is an incredible new tool that gives people a different perspective - It’s a new paradigm through which people can experience brand-new perceptions of the world." Roberts leads a team that explores new approaches in video, motion graphics, and virtual/augmented reality and he exec produced ”Under A Cracked Sky”, one of four films within the Times’ Antarctica series. He will be speaking about the organisation’s VR expertise and integration of NYT VR, a service launched in 2015, which has so far produced over 30 projects. Roberts adds, “I’ve been attending SIGGRAPH for the past few years, and it’s always been a place that has its finger on the pulse of technology - one step ahead of the curve. I’m always inspired when I attend SIGGRAPH and when I get the chance to see ‘behind the curtain’ of what’s coming up in the near future.’’ Clearly a world-class showcase and beyond the production budgets of most, NYT VR aptly demonstrates the roadmap for 360° engagement.

The success of VR in the Media & Entertainment space is inevitable, but how and when it happens is, to a large extent, up to us as a community. Do we accept the challenge, engage with the technology and drive it like Graham Roberts has done with NYT VR? That requires the creation of compelling content, and to do that we first need to master the medium and develop the toolset. A recent on-stand demo of SGO’s amazing Mistika VR stitching software would suggest to anyone with a weather eye that there’s a growing supply pressure for 360° content. The admirable Heath Robinson camera rigs that early adopters developed on the back of beer mats are now maturing into a suite of cost-effective and powerful professional capture and post tools.

I am not suggesting that we have hit the sweet spot of the Bell curve, but how long do we continue to parrot into the echo chamber that VR/AR/360° technologies are still in their infancy? Look around and I suspect that, after leaving SIGGRAPH 2017, we’ll all agree that it is now, most definitely, a very precocious toddler.