Can the Xbox One X carry 4K into the living room? 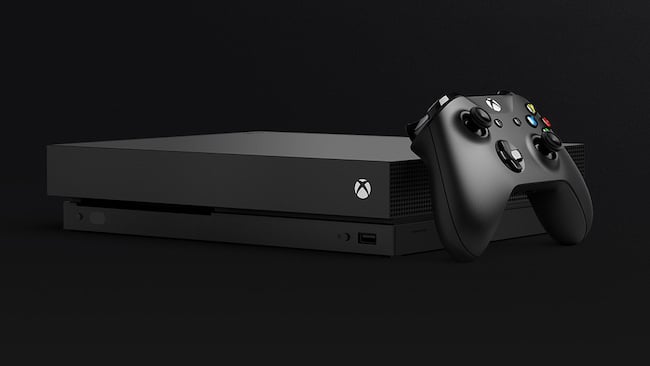 The Microsoft Xbox One X: native 4K gaming coming to your living room in November

Microsoft claims that its new Xbox One X console is the most powerful console ever. Can its native 4K games and onboard 4K Blu-ray player, provide the spark to really light the domestic 4K touchpaper this year?

In our analysis, first off George Shaw reports from E3.

e3 got off to a roaring start this weekend with Microsoft’s keynote that brought along with it a new name for Project Scorpio. Say hello to the Xbox One X, and true 4K gameplay. And let me tell you, this console is a beast. And let me say, when you look at the spec sheet, the Xbox One X doesn’t disappoint.

Project Scorpio has been in the works since last year and Microsoft has been steadily leaking out just enough details to keep us drooling until now. Now we know the official name and specs, and although Microsoft calls the Xbox One X the smallest Xbox they’ve ever made, the specs are packed and brutally powerful!

Capable of driving 4K 60 gameplay, the Xbox One X will push 6 teraflops of power from a custom GPU that runs at over 1172MHz, nearly 30% more powerful than the previous model. There’s also 12GB of DDR5 RAM, an Ultra HD Blu-ray optical drive to enjoy 4K Blu-ray movies, and a 1TB hard drive. Dolby Atmos is supported, as well as high dynamic range. Port-wise, the Xbox One X will have an HDMI in port and will be liquid vapor-chamber cooled in the same manner as high-end graphics cards.

By way of comparison, the Sony PS4 Pro only musters 4.2 teraflops and a GPU clocked at 911MHz

Another cool feature is that Microsoft has finally become sensitive to games wanting to use their existing accessories, and as such, previous generation Xbox One games, controllers and more will be supported on the Xbox One X. Save one: the Kinect, as there is no port to plug it in.

Being a 4K Console, Microsoft is using “super sampling” to upscale the 1080p games so that the graphics will be up to par, but expect them to be less than the upcoming game titles which will support 4K natively.

Over 22 “console launch exclusives” will also make their debut, with a steady streaming out that includes Forza Motorsport 7 the first to debut this coming 3 October, along with Sea of Thieves. Additional titles updates to Gears of War 4, Forza Horizon 3, Killer Instinct, Halo Wars 2, and of course Minecraft.

Thirty other titles will be updated through the Xbox One X Enhanced Program.

Cost of the Xbox One X will be $499 when it ships worldwide on November 7. That, of course, does not include any possible TV upgrades you may need to make as well.

It seems that Microsoft and Sony are taking it in turns, writes Andy Stout. Sony had a stellar E3 in 2016, now it’s Microsoft’s turn. And it’s the same with the consoles: the Xbox One X, for all its clunky name (Project Scorpio, you can’t help feeling, was infinitely better) is a significantly bigger beast than Sony’s PS4 pro.

As well as the faster processing, brought about by a 2.3GHz 8-core AMD Jaguar chip, the Xbox One X also features 12GB DDR5 RAM over the PS4 Pro’s 8GB GDDR5 and 1GB DDR3 (the slower RAM being used to for background tasks). And crucially, there is that Ultra HD Blu-ray drive. The PlayStation 2 was such an instrumental unit in helping deploy DVD into the world’s living rooms almost by stealth, that the lack of a UHD equivalent in the latest Sony machine always felt like a bit of a disappointment. Maybe the Xbox One X can address that, not to mention erasing uncomfortable memories of the failed HD DVD format which it supported with its first gen console.

Of course, in a world now dominated by streaming services, it is yet to be demonstrated that physical media is the lure it once was. What should be a lure is the new console’s 4K capability. Of course, both the Xbox One S and the PS4 pro have talked about their 4K capability in the past. Both carried 4K streaming services, the Xbox One S had an (admittedly basic) UHD Blu-ray player, and both would display games in 4K: the Microsoft unit via some nifty upscaling, the PS4 Pro via a whole mess of different enhancements, kludges, patches, and, when all else failed, via a system of checkerboard rendering that would fill in the missing pixels.

This effectively changes the shape of pixels from square to rectangular and uses data from previous frames to fill in gaps in the picture information, producing a result that the systems’ lead architect, Mark Cerny, says is “nearly identical to native 4K.”

When it’s done right, it’s exactly that. But when it’s done wrong, it’s a disappointment. And given the amount of titles that haven't quite lived up to their 4K onscreen billing as PS4 Pro patched and enhanced, it’s obviously not an easy system to get to grips with.

The Xbox One X is, therefore, the first console that can truly say its games are going to be running in native 4K. And, as a result, there should be lots of tempting eye candy on display as it launches at the start of this year’s holiday season. Whether that’s going to be enough to justify the extra $100 over and above the PS4 Pro is, however probably going to depend on the titles it can release at the same time

There was some disappointment when Nintendo pegged its Switch console at HD resolutions when it shipped earlier this year. But because it managed to couple it with Zelda: Breath of the Wild, probably the best launch title ever and one of the greatest computer games of all time period, initially that hasn’t harmed its sales one iota.

If Microsoft can get the titles right then the console will do well and play a significant part in introducing 4K gaming into the world's living rooms. And what is a fairly happy realisation is that this is only an interim generation of console. Both the PS4 Pro and the Xbox One X represent tweaked versions of what has gone before rather than a whole new class of processor power, memory and storage.

That next generation is still shrouded in the wings. In the meantime though, as The Verge puts it: “Were you concerned about the lack of ultra-realistic water with reflections in Minecraft until now? Well, worry no longer.”