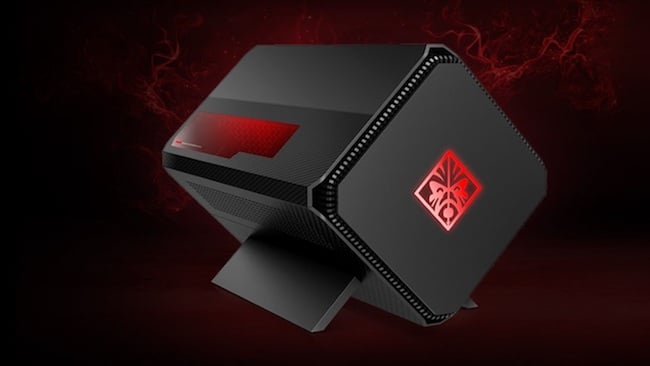 The Omens are good for this one.

HP’s new external Omen Accelerator graphics dock might come from a gaming heritage but should provide a powerful boost to anyone in need of a GPU. And that includes editors.

You may not know Omen, which is a dedicated gaming brand in the HP portfolio, just as Dell has Alienware and Gigabyte has Aorus. The working principles of Omen Accelerator are well understood, just like every other external graphics unit, however, there are some interesting details.

Most laptops have fairly weak graphics, compared to a desktop PC or workstation. This is a design decision that allows the laptop company to minimise the cooling system without increasing waste heat, slimming down the chassis and increasing battery life. It’s a win-win-win, right up to the point where you want to drive Adobe Premiere or to play games.

The alternative is to deliver a 3kg or 4kg laptop with hefty graphics that increases the cost and also hurts battery life and mobility.

There is a compromise that extends the old principle of a laptop dock that was originally used to add Serial, Parallel, Ethernet, VGA and DVI ports. That sort of dock required a manufacturer-specific connector so you could attach the manufacturer-specific dock from IBM/Lenovo, HP, Compaq or Dell. You would leave the dock in the office with mouse, keyboard, monitor and network cable attached and then when you arrived at work you would drop the laptop in place and it effectively became a slimline desktop PC.

The advent of fast USB helped to tidy up the concept of a dock but Thunderbolt 3 has changed everything. This tiny Type-C connector can shuttle data back and forth incredibly fast and can also supply power. At the most basic level, it doesn’t make much difference if you merely substitute a USB 3.0 cable for a Thunderbolt 3 cable, however, things get more interesting if the dock includes a graphics card. We have seen this approach with the Razer Core unit which is an aluminium housing that contains a power supply, PCI Express slot, USB 3.0 ports and a Killer NIC. You plug in a graphics card such as GTX 1060 or GTX 1070, connect the Core to the mains power and then plug the Thunderbolt 3 cable into a Razer Blade Stealth laptop and bingo the on-board Intel graphics are replaced by the mighty Nvidia GPU. As an added bonus the Core also charges the laptop battery using the same Thunderbolt cable, so data is flowing up and down the cable at the same time that power is passing into the laptop battery.

The Dell Alienware Amp is cheaper but uses a proprietary connector, rather than Thunderbolt, so can only be used with specific Alienware laptops.

Aorus takes a simpler approach as the GTX 1070 Gaming Box will be supplied as a unit with a GTX 1070 already installed at a total cost around £470. That seems like a very reasonable price for an eGPU that includes a bunch of ports and connectors.

The HP Omen Accelerator takes things a step further and includes storage, however it does it all in a typically HP sort of way. Starting in August you will be able to buy the HP Omen Accelerator from HP as a bare unit with its 500W power supply or you can configure the specification like a regular laptop or PC. The first choice is between AMD Radeon RX580 graphics or Nvidia GeForce GTX 1060 or GTX 1070. We understand the 500W power supply feeds up 300W to the graphics card, 60W to the laptop to power the battery and the remainder is for I/O (4x USB 3.0 and Ethernet) as well as the 2.5-inch storage bay. HP gives you the choice of a 256GB SSD or 1TB HDD with a spin speed of 5,400rpm or 7,200rpm.

It’s an interesting approach and we shall be interested to see HP Omen Accelerator in action and to learn whether it plays nicely with other Windows laptops (besides HP), not to mention whether it also works with Apple MacBook.