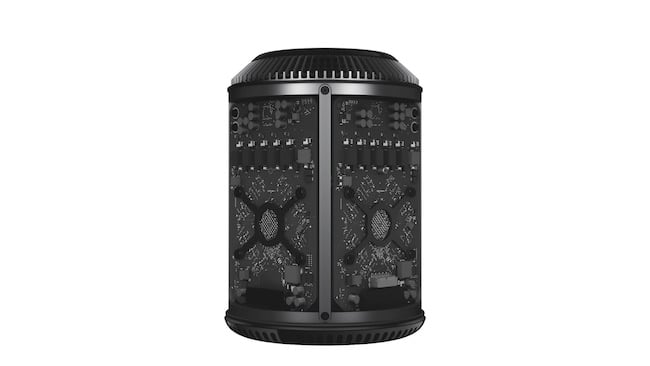 An evolutionary cul-de-sac? The soon to be replaced 'trashcan' Mac Pro

The news comes as Apple’s MacPro 2013 “trashcan” design finally gets its first update in 1202 days with modest updates to processor and GPU configurations.

There are no other changes to the MacPro, meaning that users will have to wait for Thunderbolt 3 and other advances.

But, according to Schiller at least, that wait at least may be a finite one. What’s more it might not just be the computer that gets overhauled. “Since the Mac Pro is a modular system, we are also doing a pro display,” he said. “There’s a team working hard on it right now.”

Schiller hinted that this re-envisioned MacPro will be completely re-architected and will have provisions for more powerful CPU and GPU configurations.

His comments are among the clearest admissions ever from Apple that the current MacPro 2013 has been a disappointment for many purchasers. “Our current Mac Pro has met the needs of some of our customers, and we know clearly not all of our customers.”

Complaints about the current MacPro have included cooling issues with its circular top-venting design and inability to expand or upgrade its capabilities. Apple’s chief of engineering, Craig Federighi, admitted that the circular design of the MacPro left them “a bit boxed in”, further suggesting that the forthcoming machine will be entirely different.

Professionals as well as sites such as RedShark have long questioned Apple’s commitment to the professional market and it is most reassuring to hear Phil Schiller’s unusual announcement of a product roadmap.

We’ll continue to watch with great anticipation, but don’t expect anything to happen immediately, with reports that the team working on the new design have been told to take their time and get it right. “You won’t see any of these products this year,” said Schiller.