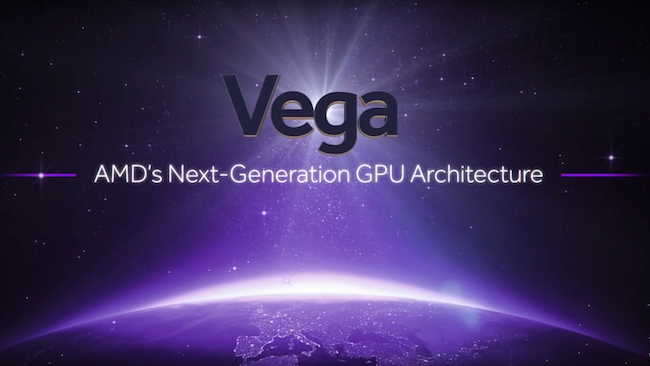 Viva Vega: AMD's latest GPU chip should be with us in the next few months

Nvidia has been dominant in the industry for so long that it is able to charge a substantial premium for its graphics cards. That might all be about to change.

Last month AMD announced that its next-generation graphics chip that has been developed under the name of Vega would go on sale with the name of … drum roll please … Radeon RX Vega. Indeed if you watch this AMD promo video you will witness the grand unveiling of the name at 1 minute 41 seconds.

You will find a teaser website here where you will see that AMD has plans for Vega models in RX (gaming), Pro (workstation) and Instinct (which looks like machine learning). Cold hard facts about Vega are thin on the ground, although we know that AMD has officially said that the first products making use of the Vega GPU architecture are expected to ship in the first half of 2017.

We expect that AMD will launch revisions of the existing RX480, RX470 and RX460 desktop graphics cards in the very near future and that these revisions, which are likely to be little more than rebadged cards with slightly higher clock speeds will be called RX580, RX570 and RX560.

This suggests that Vega will launch late in H2 which will tee it up nicely for Computex which starts on 30th May.

One thing we do know for sure is that Vega will use HBM2 memory which has double the data rate of the original HBM used on Radeon R9 Fury and which is available in both 1GB and 2GB stacks so Vega will be delivered in 4GB and 8GB versions.

HBM2 is important, not least because the next generation Nvidia chip called Volta is certain to use the same type of silicon.

The other information from AMD comes in the form of marketing slogans:

“The world’s most advanced GPU memory architecture: The Vega architecture enables a new memory hierarchy for GPUs … and can work with a variety of memory types with up to 512TB of virtual address space.”

Apparently, this means system RAM and SSD storage can be used as extended graphics memory.

Next-generation compute engine: At the core of the Vega architecture is a new, next-generation compute engine built on flexible compute units that can natively process 8-bit, 16-bit, 32-bit or 64-bit operations in each clock cycle. These compute units are optimized to attain significantly higher frequencies than previous generations and their support of variable data types makes the architecture highly versatile across workloads

Advanced pixel engine: The new Vega pixel engine employs a Draw Stream Binning Rasterizer, designed to improve performance and power efficiency. It allows for “fetch once, shade once” of pixels through the use of a smart on-chip bin cache and early culling of pixels invisible in a final scene. Vega’s pixel engine is now a client of the onboard L2 cache, enabling considerable overhead reduction for graphics workloads which perform frequent read-after-write operations.”

This sounds like the graphics developers have learned from the AMD CPU people. Make the pixel shaders less dumb (but still massively parallel) and don’t waste work on polygons that will be invisible to the user in the final rendered scene. Efficiency, efficiency, efficiency.

In addition to this published information, we also have a fair amount of informed speculation.

Out of the box, RX Vega should perform 50 or 60 percent faster than R9 Fury X, plus a bonus for extra efficiency, while using slightly less power. Sticking a finger in the air to see which way the wind is blowing, my guess is that RX Vega will perform around the level of GTX 1080 or, possibly, GTX 1080Ti.

That would be pretty impressive for a new graphics chip, however, there is no way that AMD can launch RX Vega and then watch it get immediately swamped by Nvidia Volta.AMD has to find a way for RX Vega to beat GTX 1080Ti at launch and will then need a follow-up product to hold back Volta or failing that it will need to undercut Nvidia’s  prices.

Nvidia has been dominant for so long that it is able to charge a substantial premium for its graphics cards. No doubt this will still be true after the launch of RX Vega but it seems like a reasonable prediction that come Computex 2017 we will finally have a competitor for GTX 1080 and hopefully at a much lower price.