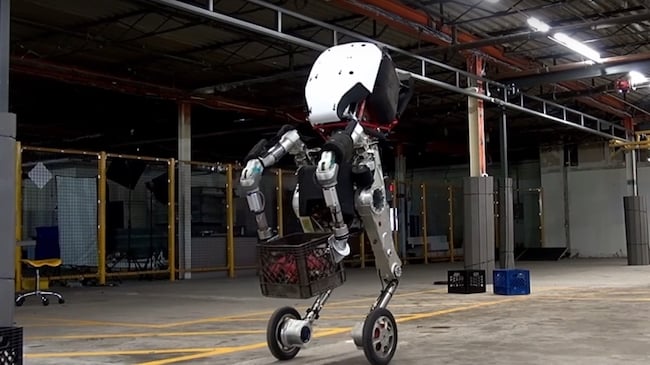 Handle is capable of lifting 100lb weights and carrying them around

Handle, a two-wheeled, four-legged hybrid robot, has a performance that really has to be seen to be believed.

These are pretty solid tenants but their writer, Isaac Asimov, didn’t mention ‘must not take the job of a human unless it pays taxes’.

Robots are part of a wave of technology – along with virtual reality and artificial intelligence – leaping out of science fiction into practical reality and causing some wild speculation about their impact.

There is a hotel staffed by robots in Japan and, in the same country, a robot bank teller. Bank of America Merill Lynch has forecast huge numbers of jobs being taken over by robots: up to 35% of all workers in the UK and 47% of those in the US, both blue-collar and white-collar jobs.

There’s also the idea, at the back of Asimov’s mind when he wrote the three laws during the Second World War — and in many science fiction dystopias since — that humanoid robots in particular are simply sinister.

What, then, to make then of Handle, a two-wheeled, four-legged hybrid robot.

In the video, posted on Wired among many other places online, Handle is recorded travelling on snow, leaping heights of near 50 inches onto a table, taking corners like an expertly-piloted Segway and even moving unimpeded down a flight of steps.

It can do all this at top speeds of 9mph on wheels that let it stand up vertically and with arms that can carry 100lb weights.

According to designers Boston Dynamics, Handle “uses electric power to operate both electric and hydraulic actuators, with a range of about 15 miles on one battery charge.

It uses many of the same dynamics, balance and mobile manipulation principles found in the firms’ quadruped and biped robots (including BigDog, a quadruped robot designed for the US military; the Cheetah which at 29mph is the fastest legged robot in the world; and RiSE, a robot that climbs vertical terrain such as walls, trees and fences).

Handle, though, has only about 10 actuated joints, so is significantly less complex.

“Wheels are efficient on flat surfaces while legs can go almost anywhere,” says the robot firm. “By combining wheels and legs Handle can have the best of both worlds.”

Boston Dynamics’ CEO has termed the prototype “a nightmare-inducing robot”. He was apparently cracking a joke at a presentation event but his words have been taken literally in some quarters to suggest the rise of the Terminator.

It doesn’t help that Alphabet – Google’s parent which bought Boston Dynamics in 2013 – seems not to like the direction of its subsidiaries’ research either.

“There’s excitement from the tech press, but we’re also starting to see some negative threads about it being terrifying, ready to take humans’ jobs,” Google director of communications for Google X, Courtney Hohne, wrote in a private email that was later copied onto a Google forum and obtained by Bloomberg. It concerned an earlier Boston Dynamics project but Google’s concern is telling. “We don’t want to trigger a whole separate media cycle about where BD really is at Google,” Hohne added.

There is a generally held view that robots and AI systems are only as smart and benevolent as the data you use to teach them.

It’s why a group of luminaries including Space X entrepreneur Elon Musk, and Facebook’s AI chief Yann LeCun were among 2,000 signatories to a set of guidelines published last month and recalling Asimov’s laws, The 23 Asimolar AI Principles.

The guidelines dug into the ethics of AI and even included a principle aimed at diverting the Terminator like “arms race in lethal autonomous weapons."

Others were more prosaic. Principle 12 on personal privacy, states, "People should have the right to access, manage and control the data they generate, given AI systems' power to analyze and utilize that data.”

Whether commercial organizations will take heed of this as they compete for business is moot. Just don’t mention Skynet.