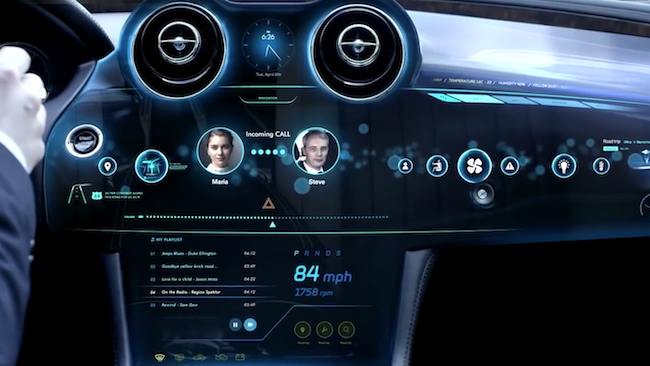 Fast forward to the future - OLED at 84mph

LG has posted a video on YouTube that indicates how it sees OLED screens developing in the future to permeate every part of our life. Meanwhile it promises a fix for its well-publicised LG UltraFine 5K Display problems.

That the OLED video starts with a quote from Victor Hugo (“There is nothing like a dream too create the future”) tells you much about the ambition of the video, which marries both some entertainingly preposterous and/or mechanically translated dialogue with some really quite smartly done CG work to depict the OLED screens of the near future.

And what a future it is. Flexible screens are only the start of it: peelable screens, augmented reality, infographics on walls and plaster casts, folding screens, wearables, images being thrown around from surface to surface, video appearing and disappearing…Basically OLED screens everywhere and anywhere.

None of which will presumably suffer from the problems that have hit the LG UltraFine 5K Display in recent weeks. With numerous reports of glitching screens circulating, it looks like the initial shielding of the units was not up to scratch and any screens too close to a WiFi router (anything under two metres) would cut out on an annoyingly regular basis.

LG now says that all new models manufactured from this month on will ship with enhanced shielding and it looks like there should be a servicing fix for anyone experiencing problems with current displays too.

But, as the saying goes, back to the future.

“A sheet of display will wrap around even our hearts and contain values of communication and healing to get us closer to fulfilling our dreams,” trills the OLED video, which is perhaps over-egging the pudding. But it is an interesting view of an information-saturated and technologically benevolent future that manages to offer something positive in these dystopian times

Have a look below. Is this what we want from future displays? Or will we be happy for walls to remain just walls.