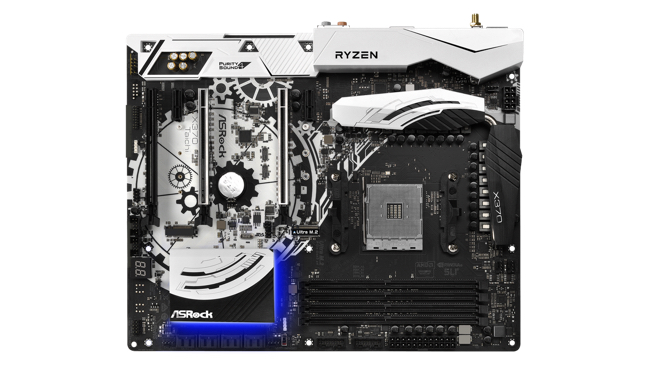 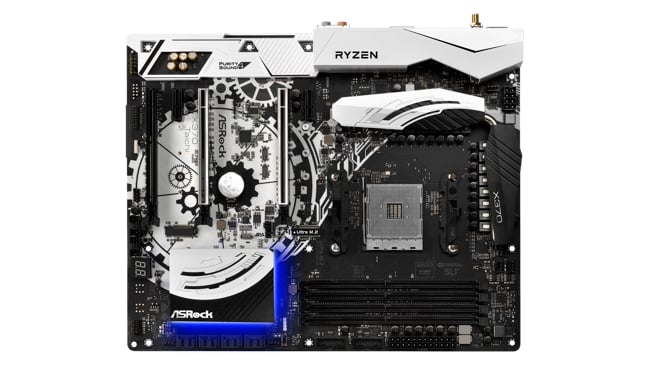 New Dawn Ryzen: a high-end X370 chipset in one of the new ASRock motherboards

AMD's new Zen-based CPU architecture will last until 2020 and beyond and is rolling out in three distinct forms - desktop, mobile and server - throughout this year. Leo Waldock, for one, is looking forward to it.

AMD has a new CPU coming in the very near future and while I hate to admit this, I am incredibly excited. The new CPU architecture has been developed under the name of Zen and we recently learned it will be marketed as Ryzen. That name is pronounced in the same way as ‘Horizon’ rather than ‘Rizzen’, so Rye-Zen.

Zen/Ryzen will roll out throughout 2017 in three distinct forms. First there will be desktop CPUs without a graphics core that are called Summit Ridge.

Then there will be APUs for desktop and mobile called Raven Ridge that include a Vega graphics core with HBM (High Bandwidth Memory). Vega is the new, secret and hopefully epic graphics core that will launch in H1 2017. These APUs will use either quad-core or dual-core CPUs.

Finally, at the back-end of the year, the Enterprise fellows will see Server chips called Naples.

Summit Ridge was originally promised for launch in Q4 2016 so clearly we have passed that point, however AMD has shown a handful of demonstrations that, naturally, display Ryzen in a good light. After that, at CES in the first week of January, AMD unleashed a torrent of motherboards and partner PCs along with details of chipsets to go with the Ryzen processors so there is undeniable progress but the exact details are hazy.

Here’s what we know for sure:
The platform for Ryzen is AM4 which was announced at CES 2017.
This processor socket will support all desktop processors and APUs so you will able to switch between Summit Ridge and Raven Ridge without hassle.
AM4 will be around until 2020 at the earliest. The prompt for a new platform/socket will be the introduction of DDR5 and PCIe Gen 4.

AMD and its partners have shown a wide array of new motherboards from ASRock, Asus, Biostar, Gigabyte, and MSI that use a variety of chipsets. At present we know about X370, X300, B350, A320 and A300 chipsets.

Every Ryzen will have an unlocked multiplier, so provided you use a suitable motherboard with A370, X300 or B350 you will be able to overclock to your heart’s content.

The high-end chipset is X370 and this is the silicon you require if you want to use CrossFire or SLI. That’s right, Ryzen is certified for SLI.

Other features are also bang up to date so Ryzen and its chipsets includes 24 lanes of PCIe (16 lanes for graphics, four lanes for NVMe or SATA and four lanes for chipset communication).
M.2 SATA devices are supported.
Up to ten USB 3.1 Gen 1 (i.e. USB 3.0) and two USB 3.1 Gen 2 ports are supported.
My reading of the AMD presentations tells me the DDR4 and PCIe 3 graphics controllers will be located in the CPU package while the USB, SATA and PCIe 2 communication controllers are in the chipset.

AMD is aiming X300 and A300 chipsets at Small Form Factor PCs which means, for some reason, they do not support USB 3.1 Gen 2.

The A320 supports USB 3.1 Gen 2 but does not support overclocking.

The architecture of Ryzen is shrouded in mystery, however we know it is built using a 14nm FinFET process that is fabbed at GlobalFoundries.
It has 20MB cache (4MB L2, 8MB+8MB L3)
Precision Boost allows the CPU to turbo in 25MHz steps
AMD claims that Ryzen uses Neural Net Prediction to improve prefetch.
The TDP is 95W.
Ryzen (and Intel Kaby Lake) both require Windows 10.

AMD debuted Ryzen by showing that a 3.0GHz Ryzen could beat an Intel Core i7-6900K locked at 3.0GHz in a demo of Blender. More recently we have seen an unnamed Ryzen CPU locked at 3.4GHz i.e. without Turbo beating the Intel Core i7-6900K in Blender, ZBrushCore and Handbrake. In the second test the Core i7-6900K was running at its native speed of 3.2GHz base with a Turbo limit of 3.7GHz.

Some obvious points arise from these demonstrations:
Did AMD use a Ryzen chip that just came off the production line or did they find a golden chip-in-a-million?
Is this the best Ryzen in the product stack or just one that happens to have a similar spec to Core i7-6900K?
How high will Ryzen Turbo beyond that 3.4GHz base clock?
AMD is comparing Ryzen with an Intel CPU that uses 5th Gen. Broadwell-E technology rather than 6th Gen. Skylake or 7th Gen. Kaby Lake.
Beating a 140W CPU with a 95W CPU is remarkable.
What price will this mystery Ryzen sell for? The Core i7-6900K is a whopping £995 or $1100 and you need up to £500 for an X99 motherboard so there is massive scope for AMD to undercut Intel.

Clearly at this early stage it would be crazy to say that Ryzen is a winner that will trounce Intel Core i7 but certainly we have grounds to be optimistic.