Does Samsung’s new Blu-ray player indicate the future of HDR? 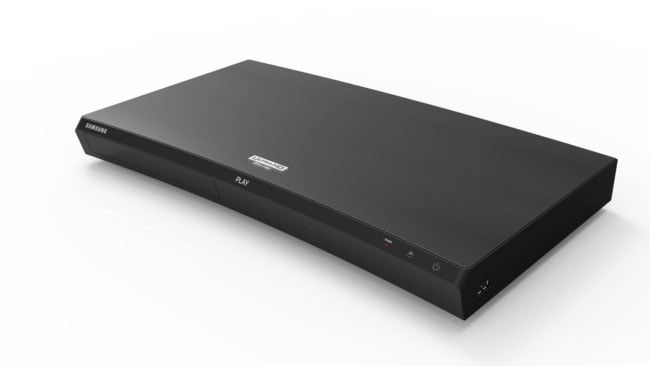 Samsung's M9500 Blu-ray player, an early release in the field of HDR-compatible consumer devices and on show later this week at CES, could signal the start of a movement away from Dolby Vision.

A major factor behind the apparent complexity of HDR is the lack of a single route to distribution. Ultimately, all camerawork and post production is pursued with the idea of someone watching the results, whether that's as simple as YouTube or as advanced as a major international theatrical release, with trailers and final materials available in a variety of languages and many formats. Until now, though, there's been no one clear leader in the world of HDR standards, and thus no clear way to approach the preparation of HDR material for distribution.

The Consumer Electronics Show, due to open in a few days, is only occasionally relevant to the production side of film and TV. Still, this gap in distribution tech for HDR, and the way it informs production, means that it's worth keeping an eye on what's going on in Las Vegas early in the new year. One announcement is Samsung's M9500 Blu-ray player, an early release in the field of HDR-compatible consumer devices, and it's interesting because the capabilities of devices like this – notwithstanding the rundown of physical media per se – will define what the audience wants and needs, and what people in production are actually asked to supply to distributors.

Thus, the key realisation is that Sony, LG, Sharp, Vizio and Samsung are historically keen supporters of HDR10, as opposed to Dolby's more advanced Vision format. At least some of the online distributors demand both, presumably because it costs them very little to in terms of the complete production budget of a high-value drama, and because they aren't responsible for implementing the consumer display end of the chain, so they need to cover all the bases. For people turning out (and buying) hardware devices, the choice is more important. The fact that the M9500, as a Samsung product, supports HDR10 but not Vision is therefore not really news, but it is another gentle indication that if the industry has a preference, it isn't for Dolby.

In some ways this is a shame, because Dolby's HDR demos have been spectacular. Of course, there's no specific reason why Vision would enable Dolby to present such persuasive trade show demos of their high-end professional monitors, that's more about the sheer power and contrast ratio on show. There are also some common technologies between Vision and HDR10, particularly the approach to encoding high dynamic range images into a distributable digital image. Ultimately it is perhaps not surprising to find the sector leaning toward a technology, in HDR10, that is not specifically tied to a single organisation with a history of making its living out of licensing fees, and which is technically much simpler to implement.

As to Samsung's HDR Blu-ray player, we'll reserve judgment until the player, TVs which support its HDR output, and discs with appropriate content can be assembled in one place. As to whether Vision is objectively better than HDR10... well. It's certainly more capable and flexible, but how much practical difference the extra capability might make is debatable. It'll also be some time before we can reasonably claim that a workable HDR distribution ecosystem exists, which would require every consumer electronics store to have several choices of everything required at something other than early adopter prices. Even so, Samsung's HDR Blu-ray player is a reasonably early indication of which way things might be going, and that's worthy of note.