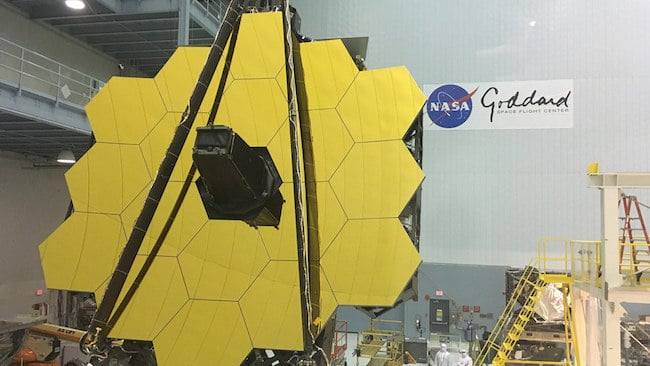 The 18-segment JWST mirror assembled for the first time

Well, it’s still two years away, but engineers have now finished assembling the optical components of the giant telescope that will build on the work of Hubble and be launched on a European Ariane rocket from French Guiana in two years time. Its mirror alone is fascinating.

‘After’ Hubble is a bit of a misnomer to be honest as NASA has no plans to retire the 26 year old telescope just yet, and indeed it is hope that it will be kept in operation to 2020 and beyond while it passes on the baton to its eventual successor, the giant James Webb Space Telescope (JWST).

Named after NASA’s second administrator, James E. Webb, who led the Agency’s Apollo program and essentially took humanity to the Moon, the JWST is being built by three space agencies (NASA, Europe’s ESA and Canada’s CSA) and workers form 14 countries. It is optimised for infrared wavelengths, this longer wavelength coverage providing it with greatly improved sensitivity and enabling it to look both further back in time to find the first galaxies, and to peer inside dust clouds where stars and planetary systems are being forming today.

To do this it needs a big mirror and, with 18 segments combining to a 6.5m diameter, the JWST’s primary mirror is 2.7x larger in than Hubble’s with approximately 7x the light collecting area. It is so large that it needs to be able to be folded to get inside the Ariane and, when its sunshield is similarly deployed, the whole thing is about the size of a tennis court.

Indeed, everything about the JWST is bigger: it will have significantly larger field of view than the NICMOS camera on Hubble (roughly 15 times the area) and significantly better spatial resolution than is available with the infrared Spitzer Space Telescope.

It will also operate much further away from Earth, orbiting the Earth-Sun L2 Lagrange point, 1.5 million km away and over 4x the distance of the Moon. There, its solar shield will block the light from the Earth, Sun and Moon and help it stay cool — a useful thing for infrared astronomy (the ESA’s Herschel Space Observatory is in the same location and also operates in the infrared).

One thing that is smaller about the new telescope is the mirror weight — 625kg including backing frame as opposed to Hubble’s 1000kg — and that’s despite its greatly increased size. It will be kept in shape by a large number of adjustors fixed to the frame and, yes, lessons have been learned following the Hubble’s infamous ‘squiffy eye’, not least not to use the same equipment for manufacturing as for verification.

Once up and running — and it will take three months after launch before ‘science-quality’ images will be produced — the telescope should be able to produce some stunning images along with all the invaluable science work. Webb (as NASA likes to call it) will have an angular resolution of somewhat better than 0.1 arc-seconds at a wavelength of 2 micrometers , meaning that it could see details the size of a US penny at a distance of about 24 miles (40 km), or a regulation soccer ball at a distance of 340 miles (550 km).

In that it’s about the same performance as Hubble, but the key here is that it will be able to resolve images 10 to 100x fainter than ones that Hubble can see, or, if your prefer, look 13.5 billion years back in time to some of the first star formation in the universe.

Webb is currently undertaking vibration and noise testing (it will be exposed to around 150db at launch and it’s always good to see what impact that sort of extreme will have) before it then undergoes end to end optical testing (again, something that wasn’t done with Hubble), assembly by aerospace contractor Northrop Grumman , and then launch.

Interestingly, its mission parameters indicate a lifespan of not less than 5.5 years ‘with the goal of having a lifetime greater than 10 years’, a figure largely dictated by fuel levels and the difficult of refuelling at 1.5m km. Given that Hubble will be 28 years old by the time Webb launches, that feels almost like short-change.

As to Hubble itself, five maintenance flights over the years by Shuttle crews have made sure it’s in as good a condition as possible. But the high radiation levels of its low-earth orbit will eventually have a terminal degrading effect on elements of its fine guidance systems, and atmospheric drag at its orbital height of 568km will eventually bring the possibility of uncontrolled reentry from 2028 (in the worst-case scenarios) on.

That leaves NASA with two choices really: a controlled deorbit or a boost. Both would require a (probably robotic) mission to reach it, but if you were going to do the latter you could conceivably refurbish the telescope too while you were there and extend its life yet further.

Much will depend on budgets, which means that much will depend in turn on politics, and the noises from the Trump camp in the US regarding Space have not been comforting so far. Still, it’s thought that detailed plans regarding Hubble’s future don’t even have to start being considered until 2020 and, as has been noted before, four weeks is a long time in politics, never mind four years.