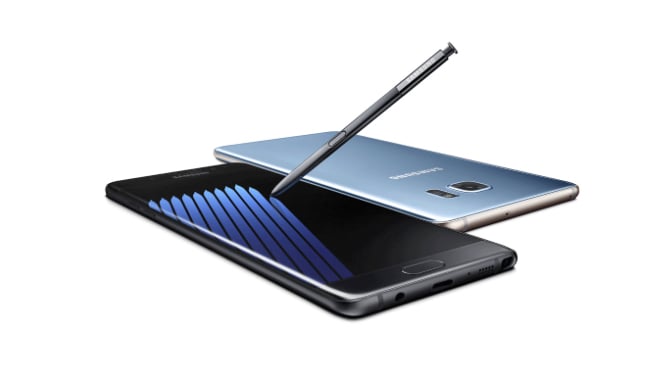 Note no more: The Galaxy Note 7 has ceased production

Many cameras and smartphones have been recalled over the years, not just for over-active batteries, but Samsung’s mishandling of the latter stages of its Galaxy Note 7 recall will probably go down in history as one of the most damaging recalls yet seen.

Samsung’s Galaxy Note 7 went on sale in 10 countries, including the US, on 19 August. A little under two months later, the company is shipping impressively multi-layered fire-proof boxes and gloves out to customers to send them back and has halted production of the units to the background music of its share price falling off a cliff and wiping $19bn off its value.

All of which must be a bitter turn of events for it after it was praised so highly for its initial global product recall of 2.5m phones on 2 September. The problems were blamed on a batch of batteries from one particular supplier. These were replaced, and by the 29 September the company confidently asserted that over 1m users worldwide were already using the Note 7s with the safe battery installed.

Only then, five replacements caught fire in early October (including one which caused a Southwest Airlines plane in the US to be evacuated after one ignited on board) and the company dithered. That is where its reputation has even damaged, possibly irreversibly. There was about 48 hours (aka an eternity in a world of social media and 24/7 news outlets) when nothing decisive was done and then everyone realised that it had committed the previous sin of not only getting it wrong once, but twice. And, what was perhaps worse, it still didn't know what the root cause of the problem was — despite trying very hard it’s not been able to replicate the problem in its own labs.

You can see what it looks like in the Associated Press video below of Honolulu resident Dee Decasa’s phone catching fire in her home on Sunday morning.

It’s alarming stuff. But while the sheer volume of smoke it produces is impressive, it’s also nothing new. According to the cameras recall list at wemakeitsafer.com,15 recalls were made from 1999 onwards in the US, most due to potential burn hazards on shocks from batteries (though the Canon EOS Rebel T4i distinguishes itself by suffering from a potential skin irritation hazard involving the rubber grip).

“Since 2005,” says the site, “there have been approximately 10 recalls involving 2 million product units.”

And if you’re interested in some of the numbers in other categories, 3 million phones have been recalled in 10 incidents over the same period, and an impressive 40 recalls of 7 million laptop batteries and chargers have been made too. In fact, browse through the categories of various recalls and anything to do with batteries and electrics is normally at the top of the list.

Until, that is, you get to one of the most infamous recalls of modern times. Back in 1998, Sony released a Night Vision version of one of its popular HandyCam Vision Hi8 camcorders. The problem was that the infra red filters that it used for night vision mode could also be used in daylight to reveal underwear, tattoos and more if they were underneath dark coloured, thin clothing such as swimsuits.

In the end, 700,000 units had to be recalled — though, as is the way of these things, the value of the unmodified ‘x-ray’ units actually went up and there was a brisk trade in them.