8K is becoming mainstream - just not from the direction you'd expect 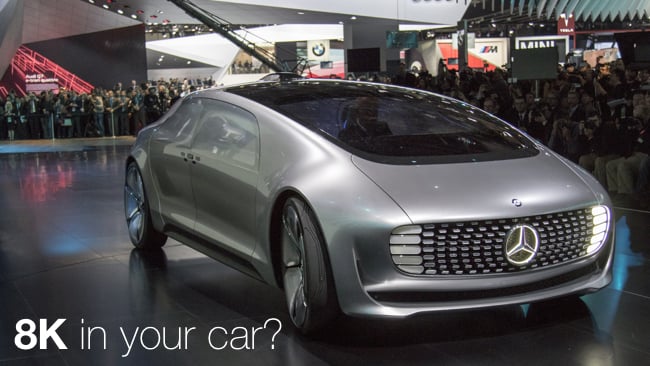 While our industry gazes at the 8K horizon, significant developments are arising from surprising sources.

These days "it's never going to happen" is being replaced by "it just happened" with increasing frequency.

It's only about fourteen years ago that a major camera company told me (with complete scientific sincerity) that we'd never be able to capture HD video with a digital still camera because the data rates are too high. A mere seven years after that, RED announced its 4K RED One: a 4K video camera. Recently (and you can see why this is important to the digital camera company), RED revealed its 8K cameras, including the incredible Helium 8K S35mm sensor.

That's an impressive curve: from "impossible even to do HD" to "8K cameras are in the shops" in fifteen years. Just in case you didn't know already, 8K has sixteen times the pixels needed for HD.

View from the fast lane

Meanwhile, I've been reading press releases about new 'System On A Chip' devices from Nvidia that will include eight ARM 64 bit cores and a GPU based on its new Volta architecture with 512 CUDA cores. The new chip will have approximately seven billion transistors. When you realise my first-ever colour TV (I was born in the Cretaceous period) had 67 transistors, that's a 100,000,000-fold increase over approximately 40 years.

Here's the thing, though. The new chip will be able to process two 8K HDR video streams, all while drawing a tiny 20W.

This isn't a chip made for video makers or even video viewers, for that matter. Instead, all this technology is pitched at powering the computing needs of autonomous vehicles. That means computer vision, which works best when given clear images to work on, hence, the provision for 8K

It's important to say here that these 'details' are very early and subject to change.

Nevertheless, it's fascinating to see that video processing technology is being pushed faster by the car industry than by the video industry itself.