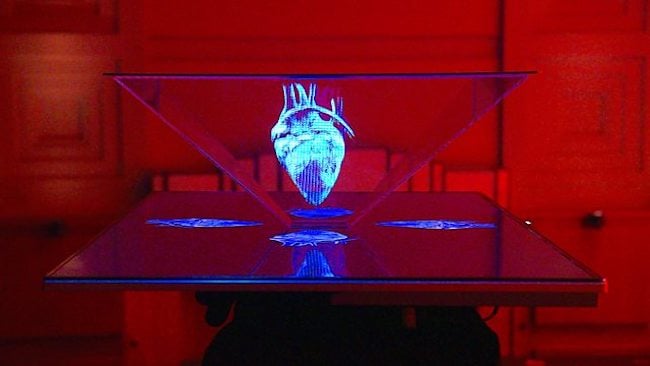 *Now* we’re living in the future. Holographic TV has been a mainstay of science fiction for years to such as extent that even the BBC can’t resist namechecking the Princess Leia hologram from Star Wars: A New Hope when it talks about it. Science fiction though has a way of becoming science reality.

The journey to holographic TV has been along one. Indeed, even the BBC’s own vaults feature a paper written as far back as 1973 dubbed ‘An appraisal of the use of holographic techniques in television systems of broadcast quality’ which concludes that the very high bandwidth video signal required (“of the order of 3x106 MHz”) and the difficulties of making equipment that can utilises it, as well as lighting problems, means that “It does not therefore appear feasible to develop a holographic television system.”

As the Corporation’s Cyrus Saihan, Head of Digital Partnerships, writes: “If devices such as Microsoft’s HoloLens and the Google backed Magic Leap also capture the public’s imagination, we could soon find ourselves in a situation where the lines between digital content and the real world become increasingly blurred.”

The BBC team had noticed that small holograms have been able to be generated using just smartphones and some household bits and pieces (have a look at Turn your Smartphone into a 3D Hologram | 4K  if you want to wile your weekend away doing the same) and simply tried to scale the experiment up using a 46in TV.

“We asked a local plastics cutter to make a simple acrylic pyramid shape based on some sketches that we had done,” writes Saihan. “By placing this acrylic pyramid on our flat screen TV, we were able to try out a modern-day version of an old Victorian theatre technique and create the illusion of floating ‘holographic’ like images.”

Now, even the BBC admits that this was a fairly simplistic experiment done mainly to gauge public reaction to the technology (which was largely positive) and there were some notable caveats to it all. Only certain types of footage will work, you need a fairly low level of light in the room, the viewing angles are narrow , and the physics of the light reflecting off the pyramid and initial display size also means that there will always be a practical limit to the eventual holographic projection.

But, as proof of a concept goes it’s an interesting, if lowish-tech, look at the whole subject. And, you will notice, no-one is talking about bandwidth as a potential problem in the future.