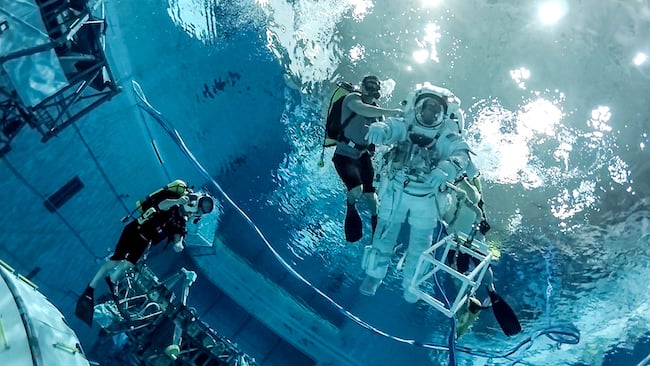 NASA’s mission to Mars could be the dominant world news story of the 2020’s with the Agency saying that video is essential to its technical and scientific success as well as mankind’s ability to experience an entirely new world.

As NASA’s Imagery Manager, International Space Station, Carlos Fontanot explained during a fascinating IBC presentation that the space agency recently greenlit the next stage of the mission which will see a new rover launched in summer 2020, landing on the planet in February 2021 for two years of investigation.

What’s more, NASA wants image analytics and optical specialists to work with the space agency on building cameras to take to Mars.

“We are looking for small cameras with low data rates that have the intelligence to auto track objects and detect change,” said Fontanot . The cameras must also store images for review. “If you have something that helps document what’s happening to people on the ground we want to hear from you.”

NASA also plans to mount VR cameras on the vehicle.  “We use VR to engage the world so that we can all come along for the ride,” he explained.

"Cameras with a 360-degree field of view with no moving parts would also be advantageous for spaceflight because we wouldn't have to fly the mass of a pan tilt unit as well as design a pan tilt unit that could survive the vacuum of space and extreme temperature variations," he said.

During the presentation NASA showed off its latest 360-degree experience of astronauts training for space walks at NASA’s Neutral Buoyancy Laboratory in Houston.

The 2020/21 rover mission a key next stage to sending humans on board the Orion spacecraft to an asteroid by the mid-2020s and to Mars also on board an Orion craft, in the 2030s.

The mission’s overall goal is simple — and strangely familiar — “to seek the signs of life,” according to Project Scientist, Ken Farley.

“Most of our astronauts are very interested in imagery,” Kelly O Humphries, News Chief - Johnson Space Station/NASA told IBC. He was also the voice of mission control for more than 50 shuttle missions. “It’s like when you go on vacation you want to come back and share what you’ve seen. Astronauts are the same.”

Astronaut training includes the build of 4K camcorders from a series of component parts in orbit. “We write procedures for them to build the rig, mount a lens, put a cage around the body,” explained Humphries.

They create so many videos that it’s a full time job to process them all back home. “We need to review the video to make sure it’s not restricted for proprietary reasons or a medial privacy issue,” said Humphries. “Plus, the files are so large they take a lot of bandwidth and the archive grows by terabytes a year. As we get into Petabytes of video we have to be more aware of what we archive and what imagery we discard.”

The Mars Science Laboratory Curiosity rover is still sending back radiation data and images from the red planet having landed in 2012.

The rover being built by NASA’s Jet Propulsion Lab (JPL) is a similar 1 tonne Wall-E style design but will pack a new set of scientific equipment including an upgraded suite of imagers.

The new rover’s main camera, Mastcam-Z (think of Wall-E’s head) will be able to take panoramas and stereoscopic images just like Curiosity, but it will also be able to zoom in further than the current rover can.

Microphones have flown on previous missions to Mars, including NASA's Phoenix Mars Lander in 2008, but have never been used on the planet’s surface. That will change in 2021 when a mic will capture sounds from Mars and in particular the entry, descent and landing sequence. The AV data will be used to assist in planning future Mars landings, for example in understanding what a parachute looks like when opening in the Martian atmosphere.

JPL is already using mixed reality sources to build the rover. Its ProtoSpace project uses Microsoft HoloLens to project images of the rover design in 3D. A second mixed reality project, called OnSight, is a VR rendering of Mars based on Curiosity’s data.

A Hololens is on board the International Space Station (ISS). "Instead of receiving written instructions or being talked through a task on radio, astronauts use the system to get real time instruction and reduce the training regime," said Fontanot. "The camera on the Hololens transmits what the astronaut sees to ground control and a NASA expert can superimpose text and graphics annotations over this view."

So no-more Apollo 9 pencil and paper math then...

The agency has always ensured that its space exploration program is chronicled, first with film cameras and then video, including the globally viewed footage of Neil Armstrong setting foot on the moon in 1969. Last November it launched a Ultra HD channel in the US filled with decades of stock footage and the latest materials from the ISS and Mars rover.

The same parameters under discussion at IBC are also beneficial to NASA - but in a different way. These include  High Dynamic Range and High Frame Rates. HDR is critical for space flight, explained Fontanot. Changes in colour, contrast and intensity are essential for imagery analysis as it applies to performance of rocket engines, structures, satellites and other hardware.  Any slight discoloration it was explained, on a surface may be an indicator of material fatigue resulting from abnormal temperatures or radiation. Cameras that can capture HDR may be a key during troubleshooting.

Perhaps it’s worth noting that the US won’t have Mars all to itself, though. China also plans to send a rover to explore the Red Planet in 2020.