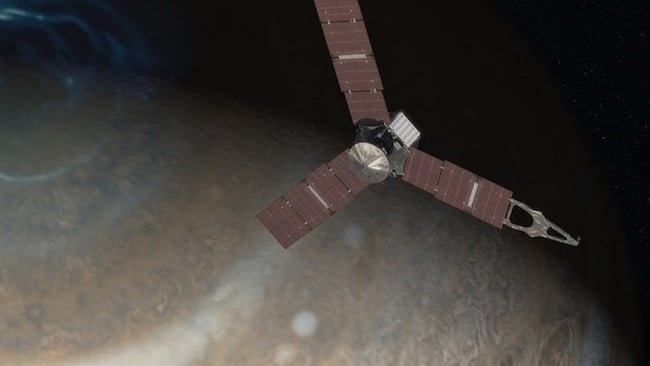 IN a few days, we'll have the real thing to examine

On Saturday, NASA’s Juno probe made the first of its 36 orbital flybys of Jupiter, passing within approximately 2600 miles of the planet’s swirling cloudscape at a relative speed of 130,000mph. So, how do you take a photo at that speed?

Beyond the sheer speed of the approach — and let’s not forget the small matter of beaming the images back hundreds of millions of miles through interplanetary space — there are a couple of interesting factoids floating around all this like small moons.

First, this is actually the closest the Juno probe will get to the gas giant. There are another 35 orbital flybys to come, as the probe executes huge, shining orbits of the planet between now and February 2018, but none of them get as low down to the top of Jupiter’s atmosphere as this one.

Second, there is no scientific basis for the Junocam (though some, such as visually studying the planet’s circumpolar waves, were grafted on after the camera was greenlit). Here’s how the authors of a paper on the camera’s design phrase it:

“The scientific themes of the Juno mission are to study the interior, atmosphere, and magnetosphere of Jupiter. The spacecraft has been highly optimized for the operation of its seven science instruments, leading to a solar-powered, sun-pointing, spinning design. Such a platform presents challenges for imaging, both from motion blur and pointing geometry. But it was appreciated that visible imaging is an important component of public engagement for any mission. So a visible camera, Junocam, was included primarily for education and public outreach, funded from the mission’s EPO budget and given a fairly constrained allocation of spacecraft mass resources.”

So, not only are you moving at 130,000mph, but you’re taking a photo with a camera designed with ‘constrained’ resources from a platform that’s spinning, albeit ‘only’ at 2rpm.

In the end, a design based on the camera used for the Mars Science Laboratory mission was chosen, both being designed by Malin Space Science Systems. The camera head is a shade over 2.6kg and mounted on the spacecraft’s upper deck and has a focal length of 11mm and a 58-deg field of view, while the CCD is a 1600 x 1200 Kodak KAI-2020. New electronics had to be designed over and above the Mars mission spec due to the increased likelihood of radiation-induced upsets from the energetic protons trapped in the Jovian radiation belts.

Junocam is a ‘pushframe’ imager, featuring multiple filter strips — red, green, blue and methane — bonded to its photoactive surface and extending the camera’s full 1600 pixel width but only being 155 rows high. Typical exposure times are about 1/80th of a second for the visible bands and about 1/2 second in the methane band. The camera also uses Time-Delayed Integration to vertically shift the image one row each 3.2ms over the course of the exposure, cancelling the scene motion caused by rotation.

Some significant post processing is then required, both on the spacecraft and back on Earth. The individual bands are extracted into 128-pixel-high “framelets”, unused lines between filters are edited out, and the compressed framelets are beamed back to base (estimates are that 40 megabytes of Junocam data can be sent back to Earth on each orbit; depending on the exact size of each image and the amount of data compression, somewhere between 10-100 images will be taken).

The MSSS Ground Data System then treats each framelet as an individual image, using spacecraft attitude telemetry to map-project them onto a planetary shape model. Finally, each map-projected framelet is finally composited into an overall mosaic by spatial location and bandpass to form an output map.

It’s a lot of effort, but it will be worth it. The Cassini images of Saturn from 2013 delivered some fantastic insight and fired the public imagination, which is, of course, important as the NASA budget is voted for by politicians (and all of which gives us a good excuse to reprint the ‘Day the Earth Smiled’ image below). At closest approach, the spatial scale caught by Junocam will be ~3km/pixel, an order of magnitude better than Cassini.

In other words, the images should be spectacular when the first arrive, hopefully in the next few days. But, time is of the essence. Despite special orbits that are designed to keep the probe out of the worst of the planet’s radiation belts, even so NASA estimates that the camera will probably fail after 8 passes. All of which gives it just over a year. 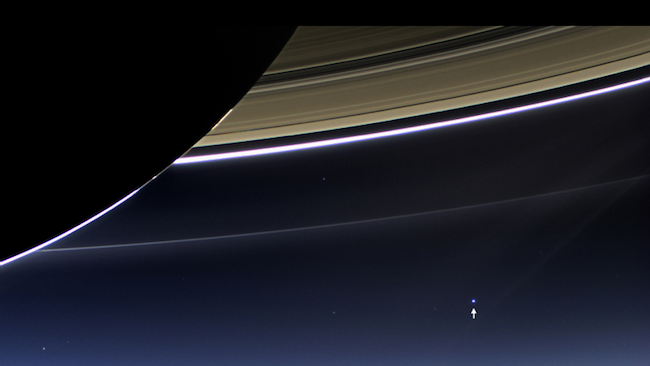