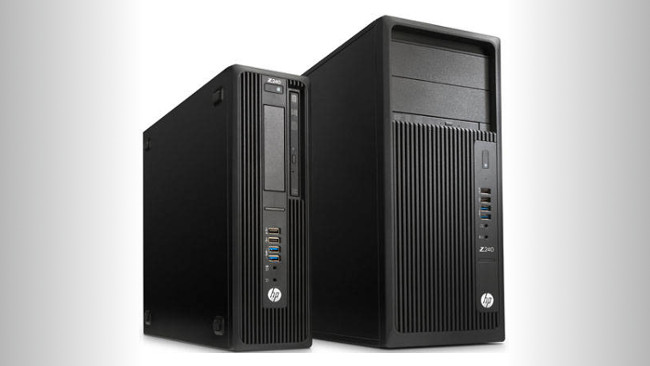 HP has announced some updates to the Z240 range of workstations with a clutch of bold claims that are intended to grab the attention.

The newest HP Z240 workstations will be available with up to 4.2 GHz of processing power, the company said, thanks to support for the latest Intel CPUs, a choice of Nvidia or AMD graphics, and HP's Z Turbo Drive PCIe SSDs.

The Z240 can be configured with an Intel i7-6700k 4 GHz processor with turbo boost up to 4.2 GHz, HP said. Anticipating the availability of faster processors, the original Z240 design included voltage regulation and updated fan tables to handle the thermal demands of the faster processing, as well as any noise generated by additional cooling requirements.

Other new features in the third-generation Z240 line-up include an integrated M.2 expansion slot (which frees up a PCIe slot for a Z Turbo device), up to 64 GB of DDR4 ECC RAM and remote software that allows Mac users to multitask between their local hardware and the HP workstation.

HP's integrated Remote Graphics Software is set to ship with all HP Z workstations starting next month. Combined with the new HP RGS Receiver for Mac, also scheduled for August availability, the software allows users of Mac desktop computers or MacBooks to securely connect to an HP workstation and multitask between native Mac OS applications and Windows or Linux software running on HP workstations.

A proprietary HP codec is used to analyse data in the workstation's frame buffer, identify sub-blocks of pixels that have changed from frame-to-frame and send only data about those parts of the image to the receiving computer. A SIGGRAPH demo showed the system handling even full-motion video playback very well. The software is intended in large part as a collaborative tool, allowing multiple users to access the same HP workstation during a long-distance review session.

Starting price for the third-generation HP Z240 workstation line, shipping now, is $879. That US$879 price translates as £690 plus VAT in the UK.

This is the third generation of Z240, which comes as a surprise as we covered the launch of Z240 as recently as October 2014, when HP debuted Xeon based on Skylake technology and an emphasis on low noise.

Presumably, there was a second generation of Z240 earlier this year, however that must have passed us by.

It makes perfect sense for HP to put an emphasis on M.2 storage as that frees up space and does away with the risk of a cable coming loose. Once the M.2 drive is installed, that, basically, is that. Giving customers the option of 'up to 64GB of RAM' sounds great, although we would argue you don't need that much memory unless you are using high-end graphics card(s) and need to feed them a river of data.

There are a couple of points in the Press Release that are incredibly specific such as "the addition of a software receiver to seamlessly link up Apple, Linux and Windows environments," which will either make your day or completely pass you by.

The Press release wraps up with a couple of quotes from the company: "HP has the expertise to design a system that runs high-performance components at their maximum while delivering the best reliability possible.... The Z240 is ideal for customers in the video editing, product design, architecture, engineering, education, public sector and image-viewing industries," said Josh Peterson, Vice President, Global Product Management for Workstations.

Which is fair enough. A workstation from HP (or Dell) might not be exciting, however it can usually be relied upon to fulfill its task and earn you money.

Looking at the product page for Z240 is an interesting experience, as there are workstations listed with Intel Core i5/i7 and HD Graphics 530, as well as Xeon E3 and Nvidia Quadro 620. Alternatively, you can configure a Z240 with a CPU as lowly as Pentium G4400, or a Xeon, or that Core i7-6700K. On the graphics front, you start with integrated Intel hardware or can choose from a long list including AMD FirePro W5100 or Nvidia Quadro M5000. It is worth noting the options for a second graphics card are sorely limited which suggests the primary graphics slots has the majority of the available PCI Express lanes allocated.

That is a massive spectrum and suggests that HP is happy to call pretty much any combination of hardware 'a workstation', as the only common features are an Intel CPU and Intel chipset. We asked HP how it achieved its claim that Z240 has 'had a double digit boost to processing power and memory'. This is what HP told us:

"To ensure a reliable system, HP improved spec of Voltage Regulators on the motherboard to ensure there was plenty of buffer with this higher wattage processor (6700K is 91W vs. our 80W Xeon processors). We did this when we launched the Z240 in anticipation of introducing this CPU. Also, HP evaluated the behaviour of this CPU relative to several different applications (AutoCAD, Revit...) and updated our system fan tables to reflect that. The result is that our system acoustics stay nice and quiet and we're able to more accurately respond to the heat being generated by this CPU, which means a more reliable solution for our customers."