The high-speed future of removable storage 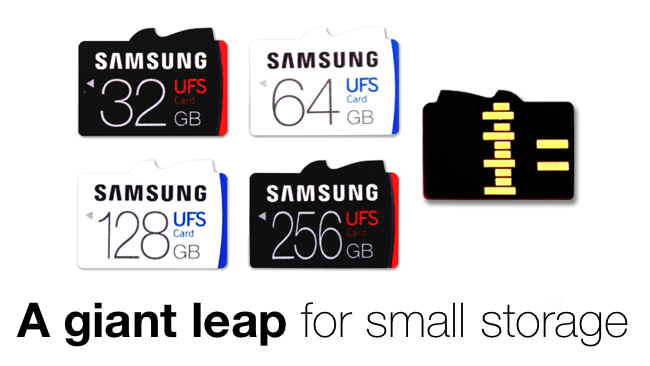 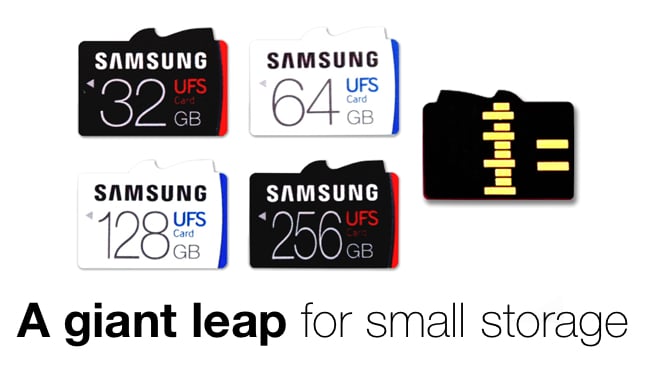 Although it's a "standard" that devices don't support yet, the new UFS cards from Samsung write much faster than microSD and offer a glimpse into the future of storage that stretches beyond the mobile phone.

MicroSD had a good run. As an open standard, microSD cards, the diminutive cousins of SD cards, found their way into a wide range of consumer and professional devices. As speed and storage demands increased over the years, so too did microSD's specs from class-to-class. But, like all good things, microSD's time as a go-to standard for compact electronic devices must end. And, with a recent announcement from Samsung, it seems like the proverbial torch is set to be passed to a new removable storage solution.

Enter the Universal Flash Storage 1.0 Card Extension, or UFS for short. Samsung has unveiled the world's first UFS cards in a range of storage capacities (32GB, 64GB, 128GB, 256GB). The real promise of these new cards is the potential of removable storage to meet or exceed the read/write speeds of a device's internal flash storage (for devices that have internal storage). The new standard can achieve speeds many-times that of the fastest microSD cards (UHS-1), which makes UFS an ideal companion for devices that record 4K video.

A card without a slot

The sticking point, at present, is that there are no devices on the market that come equipped with UFS slots. In the future, I suspect that manufacturers will have dual purpose slots that support both microSD and UFS, if at all possible - or, perhaps not. Perhaps at first, the new standard will only find its way onto devices that absolutely need the performance and speed gains, hence making microSD obsolete for such applications. Samsung touts sequential read speeds of 530 MBps, on par with some SSDs, and sequential write speeds of 170MBps. The random read and write speeds are even more impressive, at respectively 20 and 350 times that of the fastest microSDs on the market.

The upshot of all that, according to Samsung's figures, is the ability to read a 5GB, Full-HD movie in approximately 10 seconds, compared to a typical UHS-1 microSD card, which would take over 50 seconds with 95MB/s of sequential reading speed. And to shoot 24 large/extra fine JPEG photographs (1,120 megabyte (MB)-equivalent) continuously with a high-end DSLR camera, the 256GB UFS card will take less than seven seconds compared to a UHS-1 microSD card, which typically takes about 32 seconds, at 35MB/s.

The 256GB variant represents a maximum for Samsung's range, so those that need tons of storage may still be better off with microSD (which can be had at 512GB capacity, albeit for a premium). However, if your primary need is speed, the UFS cards will likely be a welcome addition in the near future.

What are the chances of it becoming a standard? Well, Samsung is one of the most sucessful smartphone devices, so it's not too much of an assumption to think that UFS will be used on future Samsung phones. And that means big numbers and lower prices.

No pricing information has been released by Samsung for its UFS card range. Likewise, there's no word on which devices will be the first to support the standard. But, as there are readily apparent uses for such a storage solution for shooters and other film/video professionals, we'll keep close tabs on this story and bring you updates as they come.