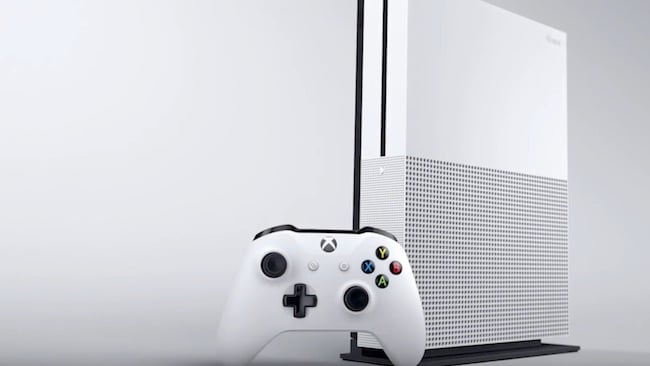 40% smaller and a lot nicer: the new Xbox One S

Microsoft unveiled not one, but two future consoles, Playstation confirmed an October 13 launch date for Playstation VR and teased its Neo 4K Playstation, and Nintendo, once more, goes its own sweet way.

Iterative console releases have fallen out of fashion somewhat of late, but as we teeter towards the end of the eight generation of videogame consoles and get our first glimpse of the ninth, we get the chance to give the current hardware one more refresh and re-release. And while the introduction of 4K gaming is perhaps not as dramatic a leap as, say, the addition of the Mega CD to the Sega Genesis some quarter of a century ago, it is both long overdue and welcome.

Microsoft somewhat stole the show with first the pre-show leak and then confirmation of not one, but two forthcoming consoles. The first is the Xbox One S, due to ship in August, a unit that is 40% smaller than the current machine, about 100% funkier, and not only introduces support for 4K but expands the console’s remit to include HDR gaming as well.

Pricing is expected to be in the $299 region for the 500GB version. According to interviews in the gaming press, the HDR support has been achieved by giving developers access to a bit more CPU and GPU power. But what is important to point out here is that we are not talking about 4K gaming: the hardware of the two Xbox One models is essentially the same and, while the new machine can support 4K, that’s 4K media playback, not 4K games.

4K everywhere comes with the new Project Scorpio, the first ninth gen console to break cover, and somewhat inevitably billed as “the most powerful console ever created.” Its developers have a point though. Due to ship by Christmas 2017, according to the picture put together by Eurogamer its spec sees an impressive power boost for living room gaming, with six teraflops of GPU power, a rumoured 12GB of GDDR5 memory, and eight as-yet unspecified CPU cores (perhaps a re-engineering of the current Jaguars), all of which should in theory be enough to enable a native 4K experience.

We say in theory, because rumours are already circulating about the Playstation Neo, the newly engineered Playstation 4 console due to land in time for this year’s holiday season, and the fact that it may be upscaling games content to 4K rather more than it is currently letting on. Already dubbed the Playstation 4.5, essentially it is an ‘elite’ model which introduces 4K to the market. Giant Bomb has done the digging and speculates that the new unit will have eight Jaguar CPU cores running at 2.1GHz rather than the 1.6GHz in the PS4, an improved AMD GCN with 36 CUs running at a higher rate of 911MHzz, and faster GDDR5 memory - 8GB at 218GB/s. It looks like all PS4 games will run on both machines which will co-exist in the market (opening up the potential for patched version of extant titles) with Sony simply insisting that the framerate on Neo must be equal or higher than on the PS4.

And if the 4.5 seems like a slightly strange move on the face of it, it makes more sense when taken against the background of the Playstation VR, which has been confirmed as having an 13 October release. Essentially it provides that little bit extra grunt that VR needs to be truly immersive, and with a whole slew of VR titles on show at E3 — Star Wars and Resident Evil chief amongst them — the prospects for the unit to take VR into the genuine mass market by Christmas seem quite good.

Despite appearances here, Sony actually rather glossed over the hardware aspects of its business at E3, instead choosing to focus on the games themselves. The master of that approach, however remains Nintendo, which chose to concentrate on the forthcoming Zelda game, The Legend of Zelda: Breath of the Wild. In fact its booth at the show was exclusively given over to the title, which will be both the last major in-house title for the Wii U (which was the version on show) and the first for its forthcoming NX console, due out in March 2017

Nintendo famously plays its cards close to its chest when it comes to hardware, so details about the NX’ capabilities are rarer than hen’s teeth at the moment. But with Project Scorpio and a revamped Playstation either in or about to enter the market, and the Wii U, for all its plus points, the worst selling machine in the company’s history, the pressure is somewhat on.

4K? VR? Something else entirely, such as a genuinely portable console hybrid? The company tends to do best when pursuing its own agenda and bringing in something genius out of the left field, such as the Wii motion controllers, but here’s what Nintendo President, Tatsumi Kmishima, said in a recent interview to Time: "I can assure you we're not building the next version of Wii or Wii U. It's something unique and different.”

Quite what, we will know next year.