Reinventing the BBC Micro with the Micro Bit 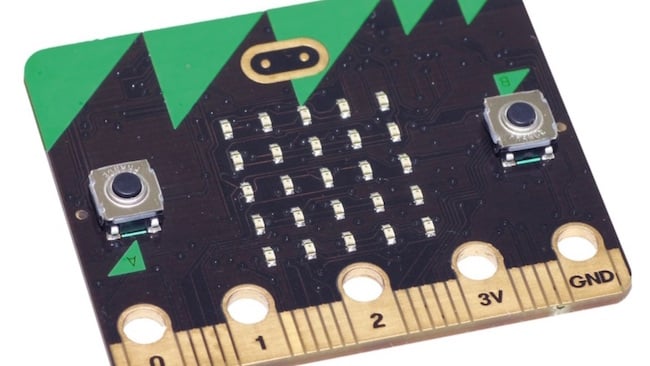 The BBC Micro Bit: How much computer £12.99 gets you nowadays.

The BBC Micro might not mean much to readers outside the UK, but over 1.5m copies of this education-oriented computer were sold in the 1980s — and now there is a successor.

The BBC Micro was something of a phenomenon in its time. Cooked up by the Corporation to help fulfil a significant part of its educational mandate, it was a key part of what was to become know as the BBC Computer Literacy Project and one of the first mass market microcomputers on the market.

1.5 million units might not sound a lot now, but back in the day it was a highly significant amount, especially as developer Acorn had anticipated total sales of around 12,000. Indeed, it is thought that around 80% of UK schools had a BBC Micro back in the day, though it got quickly overtaken in the domestic market by the cheaper (and simpler) ZX Spectrum and Commodore 64.

Anyway, enough history: the Micro was designed so that children could learn certain tasks such as programming, graphics, and AI, and the new Micro Bit has the same sort of remit. So much so that 1m of them are being given away to Y7 children (11-12 year olds) in schools across the UK, while it is also now being made available for purchase for £12.99.

Essentially it’s being billed as a gateway device to the Raspberry Pi 3, one that will teach the fundamentals of coding before people move on to the Pi3 and their ‘first proper computer’, but it has at least one significant advantage over the Pier in that it can be programmed via a browser rather than necessitating a keyboard and screen all of its own.

It’s light enough to be considered a wearable (though currently needs an add on battery pack with 2x AA batteries) and features 25 red LEDs, two programmable buttons, and a host of sensors including a built-in compass, on-board motion detector, Bluetooth, and five Input and Output (I/O) rings. These allow cradle clips, crocodile clips and banana plugs to send commands to robots and motors, while it can edge connect to a Pi and more

It's compatible with advanced programming languages such as Python and C++, and one of the partners in the project Microsoft has provided two coding languages (the text-based Microsoft TouchDevelop and graphical Microsoft Blocks). Bluetooth and web-based, it can also be happily driven from a smartphone or tablet, where it shares enough commonality with onboard sensors to allow code to be prototyped.

It’s an interesting little machine with a long heritage behind it and a serious amount of educational resource that suggests it could have a bright future. And any initiative that gets kids into coding, especially one that puts the effort into being properly gender-neutral, can only be a good thing.