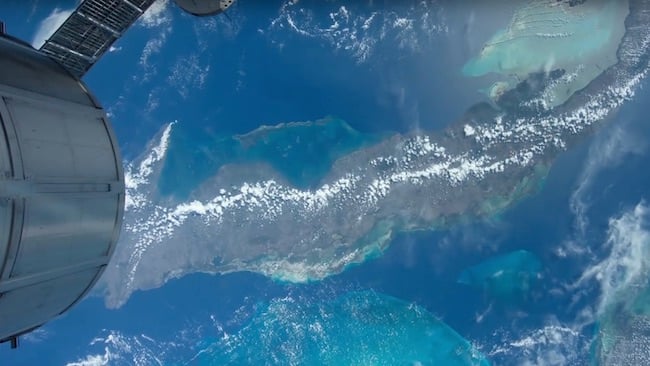 The end of the shuttle program has meant that lifting heavy IMAX equipment into space is no longer practical, which is why the recent IMAX production of A Beautiful Planet turned to the Canon C500.

The end of the space shuttle was received with dismay by space enthusiasts the world over. One of the things we now won't be able to do is to return the Hubble space telescope to its proper resting place in a big, serious museum of science. Another issue is that we can't shoot really big film formats in space anymore, which is naturally a much more important concern.

This was the problem facing director of photography James L. Neihouse, ASC, director of photography on the IMAX film A Beautiful Planet. Lifting 15-perf 65mm cameras, let alone the lenses and stock, into orbit is apparently no longer feasible or, at least, not very affordable. Anyone who's seen astronauts (or, properly, cosmonauts) cheek by jowl in the confines of a Soyuz capsule will understand why. One of the tasks facing Neihouse was therefore finding a way of capturing images which would stand up on the enormous Imax screen without requiring too much of what space logistics specialists call up-mass. 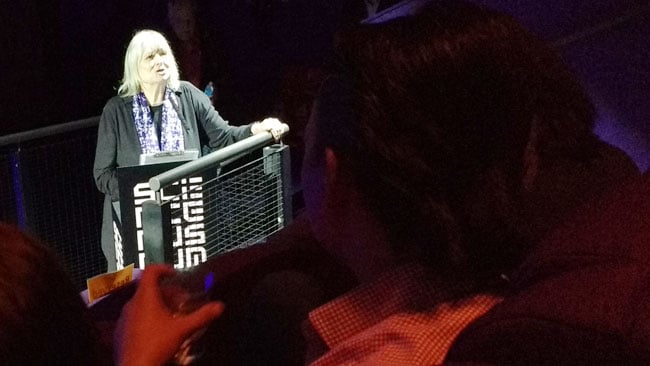 Director Toni Myers speaks before the film is shown.

Neihouse and director Toni Myers form the core of a team of specialists on filming big movies about space. Recent efforts include A Beautiful Planet, Hubble 3D, Space Station 3D and Blue Planet, with other documentaries reaching back to 1982's Hail Columbia, which covers the launch of the first space shuttle. The exigencies of shooting material where the camera crew must necessarily be at some remove from the director of photography aren't entirely new, but few crews can claim the degree of separation involved in a shoot based on the international space station.

Few rental facilities are eager to deliver to clients 250 miles off the ground and travelling at the best part of five miles a second. Neihouse also needed to teach the crews far more advanced photographic techniques than they would have learned as part of conventional astronaut training. This involved the doubtless humbling experience of shooting test footage and watching the results in a real Imax projection facility, something not often suffered by even quite enthusiastic and successful filmmakers who aren't going to spend months in orbit.

Of cameras and transmission 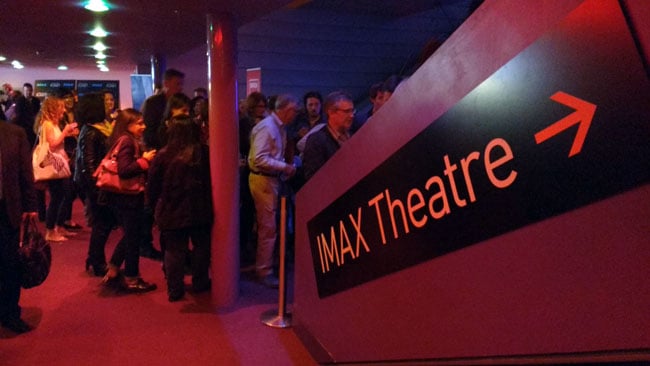 Happily, a sudden lack of giant reusable space-gliders has been matched by a sudden availability of comparatively small and lightweight 4K digital cinema cameras. After extensive testing, Neihouse arrived at Canon's C500 as the motion picture camera for the job, with the company's 1DC DSLR used for timelapse shots of the planet going by. The C500, which was used to shoot interiors of the space station, used Canon's 15.5-47mm compact zoom and a 12mm Arri Master Prime, a practical choice provoked by the somewhat cramped confines of the areas that would be shot, particularly those places where new crews arrive and departing people board the capsule home. The stills cameras, conversely, used Canon's own 14mm and 25mm cine prime lenses. Codex's onboard recorders were used, avoiding the C500's internal recording system.

As the mass to be lifted to orbit is limited, so, inevitably, is the mass to be returned, a situation exacerbated by the failure of a SpaceX vehicle in 2015 during the shooting period. Initially intending to send material back to earth on physical media, the filmmakers were eventually required to rely on Ku-band radio data links. Limited to about 300Kbps, this orbital network connection was perhaps not the most ideal way to obtain the eleven and a half terabytes of data, but as the existence of the film attests, it got here eventually. More difficult was the requirement to change the IP address of one of the station's onboard computers to facilitate a connection to the Codex recorders' offload hardware. While this would be a relatively trivial operation on the ground, the safety situation, as well as the extreme expense and difficulty of dispatching replacement parts, means that technical changes aboard the ISS are monitored and controlled very, very cautiously. 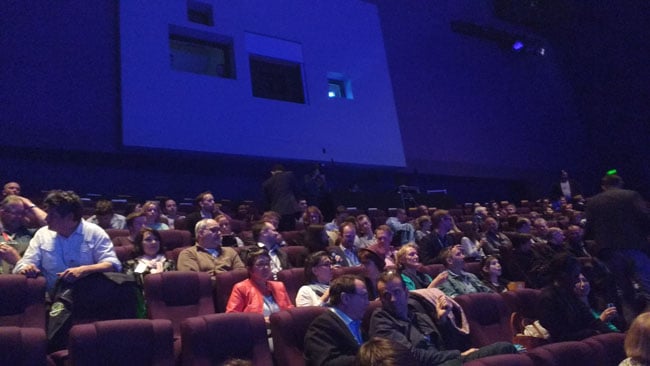 As with many Imax presentations, A Beautiful Planet is in 3D and necessarily post-converted 3D, given circumstances under which it was shot. The success of this is difficult to judge; there are certainly concerns over the fact that it was projected in 70mm, which implies a registration error which can certainly exceed 15%, perhaps even 20% of the total stereoscopic separation at infinity. Since this registration error can act either horizontally or vertically, it can be more than usually uncomfortable; your eyes will certainly converge images with a vertical offset, but it's very unpleasant. 70mm is wonderful and some people like 3D, but the combination is perhaps a dubious choice.

The finished film, at around 46 minutes' duration, is narrated by Jennifer Lawrence. In the manner of such things, Lawrence's voice is used mainly to give us the ever-worsening bad news about the rapacious damage we have done to the planet, with huge plumes of smoke billowing from the Amazon rainforest and entire coastlines deforested to red soil that runs visibly out into river estuaries. Much as it is a celebration of the science and engineering behind the international space exploration effort, it's almost impossible to make a film like this without highlighting the sheer scale of the ecological problem. The photography is spectacular, of course, as it quite properly should be, given the subject that hangs outside the International Space Station 24 hours a day, although any more than 46 minutes of it might start to seem a bit samey.

One last alarming thing about A Beautiful Planet is related, again, to the difficulty of transporting things to and from the station. One of the C500 cameras was returned to earth. Otherwise, all of the excellent and highly desirable camera equipment used to shoot the film is currently floating around in the atmosphere as so much space dust, having been allowed to burn up on re-entry with a whole lot of other things that were no longer required.