Will anti-drone technology lead to an aerial arms race? 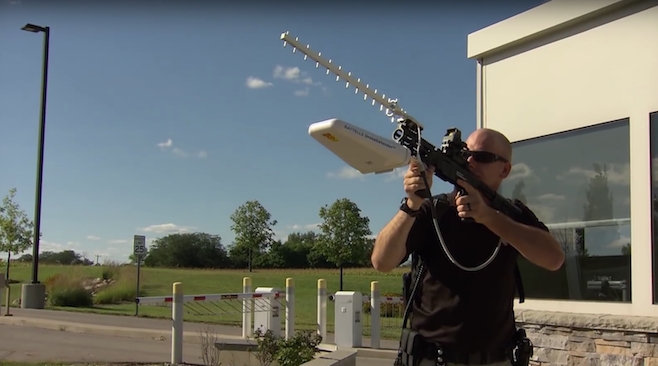 Take that, you pesky quad-rotored invader!

Drone-Be-Gone! A new risk for drone flyers might just be about to make its slightly unwelcome mark.

Two recent reports from both sides of the Atlantic have highlighted the fact that governments and law enforcement agencies are not only not overly-enamoured of drones, but also that they’re tooling themselves up to do something about it.

We’ve talked fairly recently about the moral panic concerning drones in the UK, so there’s a fair hint of schadenfreude in the story the BBC ran recently that three British companies are working to develop a system called Auds (Anti UAV Defense System) which will be included in tests at US airports run by the FAA. According to the Corporation, a thermal imaging camera allows the operator to target the unwanted drone before directional signal jamming takes place.

Two other US companies, Gryphon Sensors LLC and Sensofusion, are listed as taking part in the FAA tests, and the fact that neither of them feature in a recent Ars Technica piece reporting from the catchily named Navy League Sea Air Space Exposition on anti-drone technology only shows what a burgeoning field this is.

Our favourite of these is undoubtedly Battlelle’s DroneDefender, a video of which shows a security guard pointing what looks like a cross between a TV aerial and a bazooka at an insurgent drone and guiding it down to a safe landing in a field. It has an optical sight, a range of about 400 metres, and is described by the company as a “directed RF energy weapon” that can disrupt both the remote control signals and GPS.

Perhaps more intriguing though is Flex Force’s Dronebuster, a new version of which promises to be able to exploit weaknesses in drone comms protocols. Essentially, once pointed at an incoming drone it cycles through the command sets for various UAVs until it finds one that works, triggering the fly home command on some drones or the 'land right here' one on others.

Currently these products are only in the hands of government, but they don't need too much adaptation for public sale and use. And then, of course, there’s always the prospect of illegal use which, as drone racing gains in popularity on the one hand and the press whips up concerns about drones in the hands of paedophiles etc on the other, is probably not one to be discounted.

Can shielding technology be far behind? It looks like a lot of the arguments surrounding privacy, surveillance, freedom of expression, a man’s right to bear drones etc etc are about to take to the skies.