Dell's Latitude 12 Rugged tablet is designed for a hard life 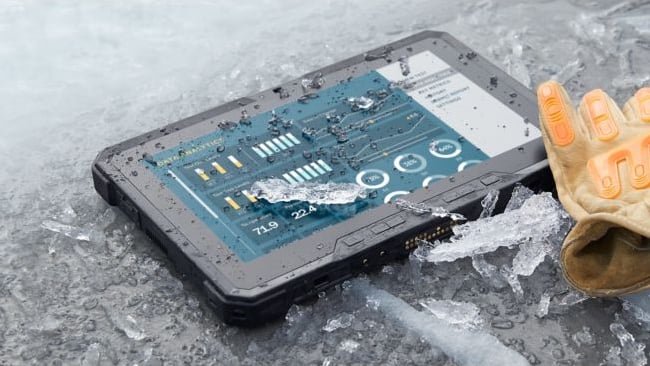 We take a look at Dell's new tablet that has been designed for rougher-than-normal use.

The Dell Latitude 12 Rugged Tablet looks like a prop from a 1990s science fiction movie. This is what everyone imagined a tablet computer would look like back then, probably because no one could conceive that, by now, we'd have the super-thin iPad and its Windows and Android equivalents. It's hard to imagine a more state of the art device than a modern slimline tablet.

So why would Dell make such a chunky-looking device? The answer is for exactly the same reason that off-road 4x4s are chunky: they're also very tough.

For all their slinky good looks and light weight, modern tablets aren't very robust. It takes a very brave person to carry one around without a cover. And you'd have to be insane or desperate to use one in the rain.

So, for a very small and narrow niche, there is definitely an argument for having a tough tablet, and Dell seems to have done a very good job with its rugged device.

All the ports are covered and watertight. There are some ventilation holes that would dissuade me from immersing the tablet in liquid, but the publicity photos show it sprinkled in water. You're certainly about a hundred times less likely to do damage to the Rugged Tablet with spillage than almost any other device.

It seems very tough. The screen looks like you could go at it with an ice axe, although I wouldn't recommend it, even though it seems to be quite happy in extreme temperatures. Everything about it exudes durability.

Battery life is good and even better with the hot-swappable dual battery option.

Even though there's only an Intel Core M processor, the tablet never felt slow. In fact, I've found the same with the new Apple Macbook, which also has an 'M' processor: despite numerous reports, I've always found there to be plenty of performance.

I have to quantify that, of course. You wouldn't want to do heavy duty computing on this tablet. It might manage perfectly well with photo editing and possibly some light video editing, but anything more than that is going to show the limits of the processor.

The screen is certainly very bright. It's not dazzling in absolute terms, like some of the new HDR screens, but it is very usable outdoors. I found the resolution to be rather low at 1366 x 768, but it is perfectly usable, if a little soft compared to today's high resolution screens. Colour accuracy is questionable too, but this will not be foremost in your mind as you're parachuting out of a helicopter or standing under a waterfall.

To be honest, I can see the main use for this being on a production set. It is made to be outdoors, being carried, dragged and dropped. And yes, you can drop it with impunity, up to around three or four feet, on a hard floor.

Overall, this seems like a very competent tablet, with a talent for survival. It's not too expensive, either, starting at £1,369.

If you're going on a tough shoot and must have a computer, this is definitely one worth considering.