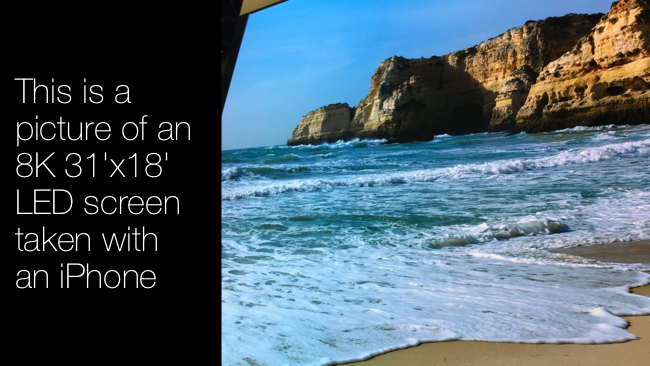 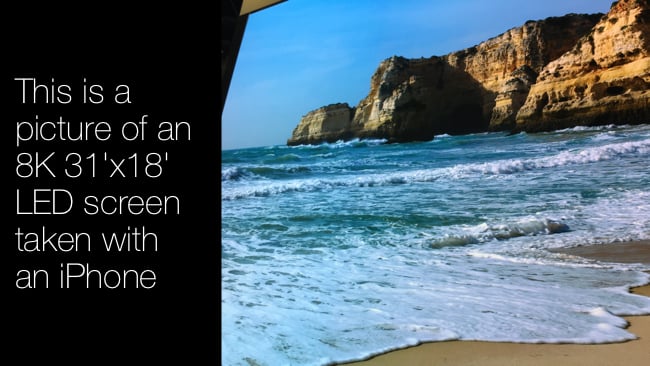 The 8K LED screen is now a reality, with Leyard's introduction of its gigantic 31-foot display.

This is something I didn't think I'd see for many years: it's an 8K LED screen by Leyard. Any 8K screen is remarkable, but this one was as big as it was unexpected.

I just want to be clear about why this screen is remarkable: it's because unlike LCD and OLED screens, this one has a little light emitting diode for every pixel. That's a lot of LEDs for 8K (conventional wisdom has it at around 32 million of them). Don't confuse this with an LCD screen that has LEDs as a backlight. This is a true LED screen. It doesn't need a backlight because the LEDs are the pixels themselves.

It's not cheap. It will set you back between $1.9M and $2.4M depending who you ask. And you probably won't fit it in your living room.

What's it like standing in front of an 8K screen that's the size of your house?

It's like nothing you've ever seen before. The closest thing I have ever seen is a "traditional" IMAX screen. This isn't as big, but it has the same sort of impact.

What's truly amazing is that even very close up, the picture stays convincing. This is often a problem with lesser resolution screens because when you get close to the LEDs themselves, you see them as individual points of light rather than pixels in the image.

The screen itself has a very small pixel pitch (the distance between the LEDs) of 1.2mm. There was an engineering sample of an even finer pitch - 0.9mm 4K screen as well.

The picture was like nothing I've ever seen before. When I first saw it, I didn't know what type of screen could be making this type of image. It didn't look like a typical LED screen. There was something slightly odd about the colour rendition, but nothing that really detracted from the impact of the picture.

One advantage of LEDs is that you can have a true black – subject only to the reflectivity of the screen and the blackness of the gaps between the LEDs, so I would say that the screen is a candidate for HDR.

This is a massive technical achievement! I had thought that we were a very long way from seeing an 8K LED screen, but it's here and you can buy them to put at one end of your living room or, more likely, lean one against the side of your house.