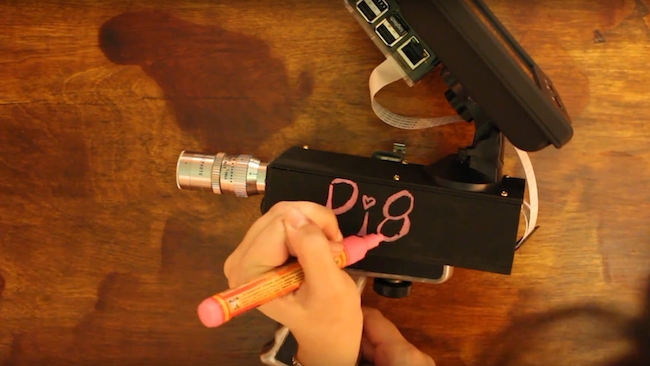 The quest for the vintage aesthetic in photography and video has seen some strange bedfellows over the years, but few are as instantly arresting as Claire Wright’s marriage of an old 8mm camera with a Raspberry Pi.

As hacks go, the 8mm Pi is rather elegant in concept if not perhaps in aesthetic ergonomics and gives you all the look of 8mm film with all the convenience of digital. Well, as convenient as you can get with an old camera with a modern cheap computer strapped on to it that is.

The results are undeniably cool though. As Hackaday reports, the coupling of a 4.5mm x 3.3mm 8mm film frame with the 3.76mm x 2.74mm Pi camera sensor is not too bad a fit. Certainly it produces some realistically vintage looking results. The lens is mounted in an enclosure that contains the rails from an old CD-ROM drive. An HDMI screen on top provides live monitoring, while a pistol grip mounted on the bottom provides handheld usability. Motor driven focus has since been added as the frankencorder evolves.

Claire’s film talking about the evolution of her camera with some footage shot on it of a road trip to Austin, Texas is below. Certainly it's a fascinating homebrew project, and maybe even one that will see a productised spin-off and a Raspberry Pi vintage accessory in the future. With thanks to PetaPixel for the tip-off.