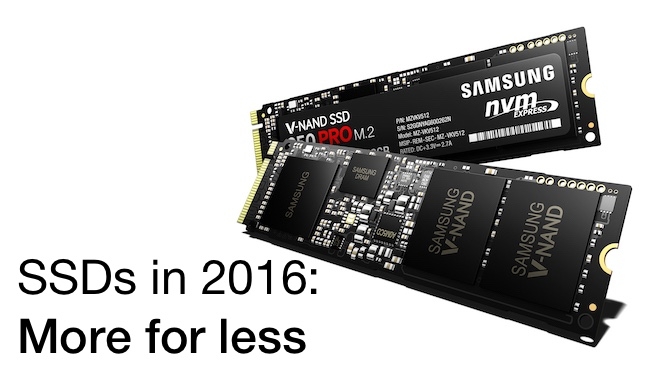 SSDs are tumbling in price and currently offer the most amazing value for money, dipping below the $300 per TB barrier. But, as Leo Waldock says, workstation enthusiasts still need to be careful in making their choices.

If you want proof just check out the 960GB SanDisk Ultra II that is currently on sale for £200 at Novatech, Dabs and eBuyer or £184 at Scan.

In fact that is only part of the story as I bought one of these 960GB drives around Christmas time when I got an email voucher from Scan and paid a mere £150 after I applied a discount at checkout. I have been very happy with my purchase and my own PC now runs on three 2.5-inch SSDs (500GB+500GB+1TB) and one 3.5-inch 6TB hard drive.

Hurrah, the era of the 1Terabyte SSD that sells for less than £200 has arrived. You can currently buy a 2TB Samsung 850 EVO for £500 so as prices drop and 4TB SSDs arrive at a sensible price we should be able to consider ditching hard drives in workstation PCs altogether during 2017 or 2018.

But hang on, don't let's be too hasty.

In April 2014 a 500GB Samsung 840 EVO cost £230 so in two years we have seen capacity double or, if you prefer, prices have halved however that trend slowed a few months ago.

I rely on Crucial, the marketing arm of Micron, as a guide to prices as Crucial has good access to memory chips and sells direct to the public. Their 960GB BX200 SSD sells for £220 and the slightly more sporty 1TB MX200 has a price of £255.

That sounds a bit strange when you consider that SanDisk is a respected brand and the third largest manufacturer of flash memory on the planet (Samsung is top, then Toshiba, SanDisk, Micron, Hynix and Intel) but when you take a closer look things become slightly clearer.

SanDisk partners with Marvell to supply the controller chips in its SSD, then it adds appropriate NAND, writes the firmware and includes software for caching data and cloning your Operating System to assist installation. On the consumer side of things SanDisk offers a budget drive called SSD Plus, and then we have Ultra II with
19nm TLC (Triple Level Cell) NAND and Extreme Pro with 19nm MLC (Multi-Level Cell) NAND that takes the price of a 960GB SSD up to £280.

It is a similar story with Crucial which also uses bought-in controllers from Silicon Motion or Marvell and either Crucial 16nm MLC in its MX200 SSD or TLC NAND in the cheaper BX200. If you see a Crucial or SanDisk SSD in M.2 form you can be confident the interface is the elderly mSATA connection.

In case you are wondering, yes I am aware that SanDisk has an extensive Enterprise range of SSDs based on the Fusion io technology they bought in 2014 but we are dealing with home and business products here, rather than Enterprise.

Both Crucial and SanDisk give their SSDs a speed boost by the use of caching software that operates some of the NAND in SLC mode which is a trick we first saw employed by Samsung.

Samsung's 850 product range uses a similar logic so 850 EVO uses TLC, 850 Pro uses MLC and the M.2 form factor SSDs have an mSATA interface. One significant difference is that Samsung uses its own controllers which are based on ARM technology and presumably gain some advantage from Samsung's massive lead in Smart phones which also use ARM.

The big news here is that 850 EVO/850 Pro are the previous generation of technology. For the hot new hardware you need 950 Pro which has an M.2 form factor, PCI Express interface and employs NVMe (Non-Volatile Memory Express) which is the next step on from AHCI (Advanced Host Controller Interface). We first saw NVMe used by the Intel 750 SSD which is a full PCI Express card, rather than an M.2 SSD.

This is cutting edge technology with massive speeds (2500MBps read, 1500MBps write) and, despite the relatively tiny M.2 form factor, Samsung has managed to pack in 512GB of storage thanks to its use of 3D V-NAND. The cost is £150 for 256GB or £260 for 512GB so you're paying a significant premium to get the latest and greatest technology.

This takes us back full circle to that 960GB SanDisk Ultra II that sells for something under £200. If you're looking for a high capacity 2.5-inch SSD with a conventional SATA III interface that you can add to an existing work station or use to upgrade your laptop then SanDisk Ultra II has a lot to offer. Any modern SSD is faster than pretty much any hard drive that money can buy and SanDisk Ultra II will allow you to open video files instantly, with zero lag.

Then again, if you're a fussy customer who demands the best, money no object, perhaps SanDisk Ultra II won't quite meet your expectation and you would be better off going for Samsung 850 Pro. While you're at it you should push the boat out and go for a 2TB 850 Pro, just because more is better.

Both of these approaches are acceptable but they are way behind the cutting edge. If you want blazing speed for multiple 4K video streams and epic amounts of data you should forget about SATA and switch to PCI Express. The storage you need is Samsung 950 Pro or Intel 750 in conjunction with an LGA2011-3 motherboard, Intel Core i7-5930K or 5960X CPU and a massive amount of DDR4 memory.

There's a reason why that 960GB SanDisk Ultra II that I bought (and with which I am perfectly happy) looks so cheap. It doesn't push any boundaries or use cutting edge technology. Despite having a controller that is a few years old and NAND that isn't especially fast you end up with an SSD that does a perfectly sound job at a reasonable price and that is the very definition of good value for money.