Why was Spectre's image quality so poor at the cinema? 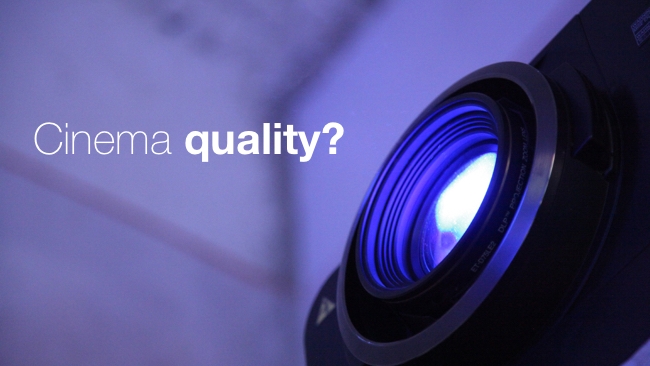 The cinema had the latest 4K equipment - and the trailers looked wonderful. So why when I went to see Spectre did the main feature look so bad?

I saw Spectre at the weekend night. It was great. It passed my most important benchmark easily, which is that it mustn’t seem too long. At nearly three hours, that’s a challenge, and one that was comfortably met.

The cinema was good, too. It was a big multiplex on the edge of the centre of one of the UK’s major cities. They’ve obviously just spent a lot of money upgrading the place, because the seats were all leather, and electrically reclinable. Very nice.

And the pictures were fantastic. A big “Sony 4K” logo came up on the screen, and the adverts and trailers that followed were crisp, bright, colourful and contrasty. All of them looked like excellent HD and some even genuinely looked detailed enough to be 4K.

I was sitting in about the third row back, pretty close to the screen, but the pictures still looked easily good enough. I was impressed.

Until, that is, the main movie started to roll.

At this point, I noticed that the quality of the main film was nothing like as good as the preceding material.

It looked soft, unsaturated, grainy (but not in a good way) and noisy and indistinct in the shadows. At times it almost looked like a high-res version of a VHS recording!

I have no idea what was going on here. I don’t know if there was something wrong, or whether this cinema buys lower resolution copies for its secondary screens (I really do doubt that). Or maybe I’ve got so used to digital that I was noticing that most of the movie was acquired on 35mm film. I’m no expert on cinema film delivery or projection, but I am used to looking at very high quality material, and this certainly wasn’t.

It was all the more striking because I had already seen that the cinema was capable of projecting extremely high quality pictures.

I’m not the only one to notice this. Posters to this AV forum have seen the same thing.

I should add that I'm absolutely certain that the master copy of the film will have looked fantastic. It's inconceivable that such a high profile film wouldn't look amazing. Something must have gone wrong as it was encoded for distribution to the cinema, or there was a drastic issue with the projection, which must have occurred after the trailers and the adverts were show, because they looked amazing.

I’m puzzled. If anyone can shed any light on this, I’d love to hear from you.