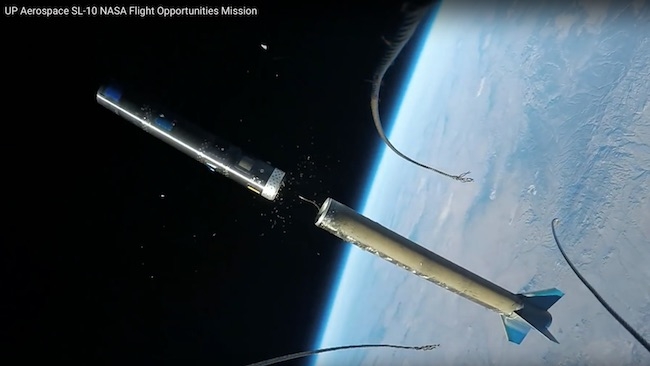 Replay: As regular RedShark readers will know, space footage is often jaw-droppingly fantastic, but this video is even more so than most because of the way it's composed.

On November 6, 2015 UP Aerospace successfully executed a mission for NASA to deploy the Maraia Earth Return Capsule. The mission reached an altitude of 75 miles above Spaceport America and landed 30 miles down range on White Sands Missile Range. The mission was UP Aerospace's 10th SpaceLoft rocket launch and its first deployment mission.

So far so pedestrian, even the launch footage of the crazily spinning ground receding below can be considered fairly run of the mill nowadays. But it’s what happens when the rocket separates at around the 1:00 mark that really makes this video stand out.

Basically, it’s a perfect shot: the camera mounted on jettisoned piece of space debris  just manages to rotate at the perfect time and speed to catch the explosive separation of the other rocket components B & C and frame it exactly.

It’s a masterclass in composition and proof that you don’t need to go to film school to do all this video malarkey - you just need to rely on orbital mechanics and a rather large amount of luck.