Apple rolls out new Retina 4K display for the 21in iMac 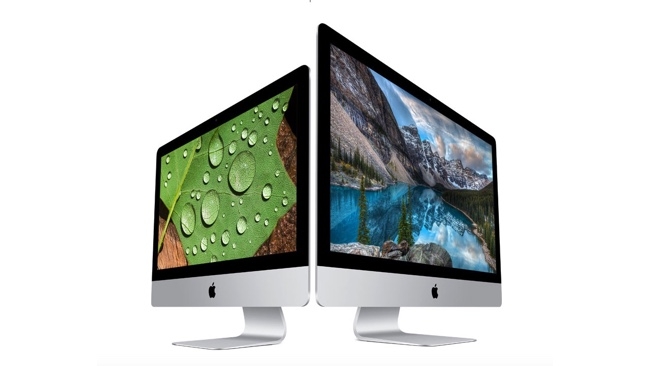 Cupertino has updated its iMac range, not only bringing in a new Retina 4K 21in model but making the Retina 5K display standard across its 27in units, bumping the panels up to DCI-P3 colour space, and adding some nice new hardware upgrades to the machines too.

The Retina 5K iMac is around a year old now, but when it was first introduced it was very much a solo effort sitting at the very top of the iMac range. Now the visuals upgrade is being rolled out across all the different 27in models.

Plenty of other official upgrade options are available.

Arguably though it’s the 21in 4K upgrade that’s the most significant release, ramping up the standard 21in iMac display to a —slightly odd — 4096 x 2304 resolution, 4.5x more than the standard models. Price starts at $1499 and includes a quad-core Intel Broadwell processor, 8GB of 1867MHz LPDDR3 RAM, Intel's integrated Iris Pro Graphics 6200 GPU, and a 1TB 5400 RPM hard drive. Prices rise from there with various upgrades, though it looks like there aren’t any GPU options available at 21in any more at all, which is a bit of a disappointment.

You could also save yourself $400 and buy the new non-Retina models. Or you could spent the extra $300 and jump on the bottom rung of the 27in models, which at least sees you tapping into Skylake architectures and availing yourself of GPU power.

Either way, one commonality across all the new screens is their support for DCI-P3, which expands the visible colour gamut by up to 25% and reportedly really makes colours pop out of the screen. All new machines also feature two Thunderbolt ports.

New wireless accessories, meanwhile, include the new Magic Keyboard featuring a full-size keyboard in a new design that takes up 13% less space on your desktop; a lighter, sturdier, ‘glidier’ Magic Mouse 2; and Magic Trackpad 2 with a 29% larger surface and Force Touch, which is a nice addition to the desktop.

UK pricing is, as ever, less generous than exchange rates would have you think, with the entry level Retina 4K 21in coming in at £1199 and the 27in models starting at £1499. Euro prices probably suffer the same fate.

As Apple rather cutely puts it, Retina displays now come in ‘colossal and ginormous’. As ever though, unless you’re coming in right at the top end, there are a range of compromises and choices you have to make to get the machine you most want — and, this time round, it seems that some of them are slightly tricker than ever.