Why put a camera on your shoulder? 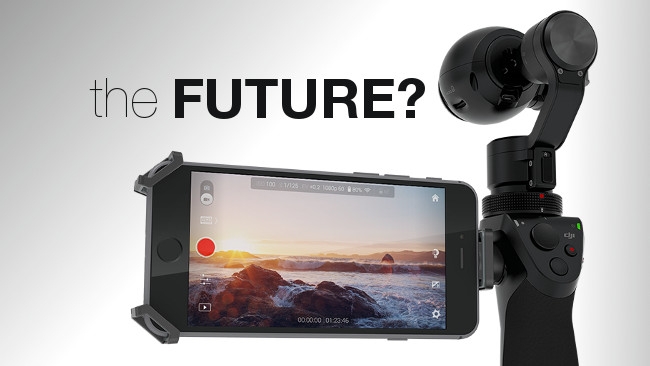 RedShark Replay: The traditional camera form factor as we know it has been shaped by technology that is now obsolescent. Maybe it is time to move on.

I’ve written many times here before about the possibilities for future camera design. However, recently it has occurred to me that our entire idea of what a camera will be in the future may be so far removed from what we currently have that it may not be worth predicting! But, what the heck, I will have a go anyway.

A little while back, I speculated that we may well have to give up our snobbishness over auto focus, with technology developing so fast that new, easier and faster ways of selective focus being developed to better cope with keeping tack sharp images at ever-increasing resolutions.

A lot of people read that and balked at the mere suggestion that any form of auto focus could replace a human turning a lens barrel. However, I was not suggesting an auto-focus, merely a much better visually-controlled electronic focus system that took all the guess work out of nailing a sharp image with the newer more critical higher resolution systems available now.

Last week, DJI announced the OSMO handheld gimbal system. This system has been on the cards for a good while now, ever since the Inspire 1 was announced in fact. I initially thought that it might be a bit of a gimmick, since it was originally designed with the Inspires camera in mind – not exactly the pinnacle of image quality. Indeed, the initial version of the OSMO is supplied with a variation of the Inspire 1 X3 camera, recording to the same low 60Mbps bitrate.

In any case, what’s so new about a small handheld gimbal? You might ask, "what the big deal," when other small 3 axis stabilisers have been available that support the GoPro for a long time now.

But (and this is a big 'but'), the OSMO is also compatible with the new X5 and X5R MFT cameras. This small detail changes things significantly, especially if DJI adds support for lightweight primes in the 30-70mm focal length range to allow greater creative shot freedom. What we have with the OSMO combined with the X5R is a fully-stabilised camera platform that records DNG RAW video footage with 13 stops of dynamic range, with full control over framing, that will fit into a small rucksack.

Not convinced? Well, you can bet your bottom dollar that there will be some innovative cinematographers who will use the OSMO to obtain shots that were previously impossible to get or would take much larger and heavier amounts of rigging to obtain. You could mount such a camera on a highly portable jib, on a lightweight cablecam, on a car, on a bike, while skiing, in all manner of situations. While the OSMO is not waterproof, it will be an adventure video producers dream when combined with the X5R.

And there we have the start of something. The X5R is an interchangeable lens camera. It is merely a camera head mounted on a small gimbal. Nothing else. Framing and control comes from a smart phone or tablet and from the device itself. No bulkiness or heavy weight.

Given the extreme light weight of such cameras, plus the fact that they can be fully-stabilised for shots that are as smooth as butter, do we really need to continue developing cameras with large bodies and reams of buttons any more? Technology will only get better and better and such cameras, as seen by the OSMO, can be made to have good ergonomics and usability.

Maybe it is about time we rethought entirely what a camera should look like and how it should be constructed. The least bulky and intrusive a camera can be made, the easier our lives can be made. Maybe manufacturers like DJI will be the ones to think different, as it were.

When I tested the URSA for RedShark News, one of its biggest problems was bulk and weight. I just didn’t feel creative with it. It sapped my ability to be creative because each setup meant a military operation to move it. On the other hand, I absolutely love the Blackmagic Pocket Cinema Camera. If BMD ever made that camera with a 4K chip and much better slow motion capabilities, I’d be one of the first in line to buy it.

I can be creative with such a camera because setups do not take as long. If I need to move, the camera it is easy. If I need to play around with the angle, it is a cinch to experiment.

I do, of course, realise that many of you fine people out there will disagree vehemently. A professional camera must look and behave like all professional cameras before it. It must have a body with lots of switches and buttons. But, this needn’t be the case. The camera serves one single purpose: to record our creative vision in the highest quality way possible.

If such a camera can be made both small and unobtrusive, yet keep the same picture performance and make a step change improvement in how the settings are made, then this can only be a good thing. All it will take is for someone to make the breakthrough into the mass market. As Steve Jobs once remarked, how do people know if they want something or not if it doesn’t yet exist?