Looking into the future at IBC's Future Zone 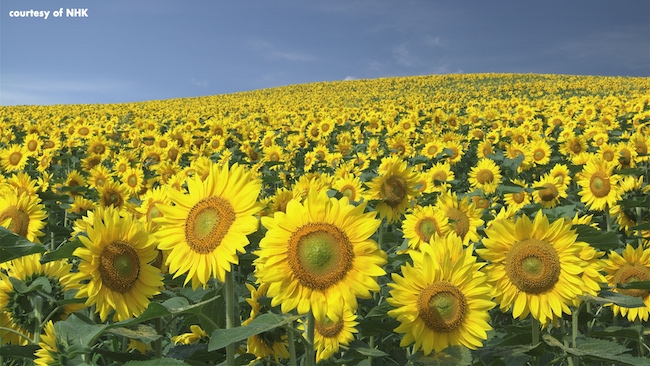 Super Hi-Vision - out in the field

The shape of things to come: One of the most fascinating areas of IBC every year is the Future Zone, with this year's crop of exhibits and topics  straight out of the world's R&D labs including innovative 3D, 8K HDR television and video-over-IP.

The Future Zone area at IBC often lacks the glitz of the main show floor, with smaller booths and less elaborate sets. For that matter, the things on display are frequently not products, but one day, they might be.

There are also some things which should be doing far better than they are: the Vision III company has been showing its v3 system since before mainstream stereoscopic 3D was big. The company is still showing v3 even though stereoscopy isn't big anymore. It is a great pity that its genuinely innovative approach hasn't caught on more. You can see demonstrations of the technique (yes, on your conventional computer monitor) at www.inv3.com. It is probably at least two thirds as effective at imbuing an image with three-dimensional depth as full stereoscopy, while being about 10% of the grief and hassle and, in my experience, creating zero per cent of the nausea.

The technique at play is clever and subtle. For live photography, the company's AX3 device (compatible with Angeniéux 19 and 26x HD ENG lenses) employs an oscillating iris, which effectively moves the aperture around in a circular motion a few times a second. This does not affect subjects at the focal distance, but creates a practically-invisible motion in subjects nearer or further away. The degree of motion is adjustable and the company's research has determined that a rate of about four revolutions per second is ideal. The result is an extremely subtle difference in perspective which allows the human visual system to perceive depth in the image in much the same way we do when we look at a tracking shot or simply move around an object in order to observe it from different angles. The v3 system exploits this to the greatest possible effect by providing constantly-updated information about parallax in the scene, irrespective of other camera motion. At IBC 2015, the company demonstrated 3D graphics using a similar approach, in which the virtual camera is made to travel in a circle around its notional position.

The disadvantage is that the sort of extreme party tricks that stereoscopy can do aren't as available, because extreme foreground or background objects can cause the wobble to become excessively visible. On the other hand, taking the pointy-object trick away from Hollywood's stereographers would seem to be, on balance, a general service to humanity. The other advantages are huge: it can be shot with a single camera and a single lens, no special recording or postproduction equipment or technique is required, and it can be viewed on any display. It is a very good idea.

Right down the back of the Future Zone we find, as usual, the 8K television demonstration. NHK has been showing the technique it calls Super Hi-Vision since 2002, but this year things have improved markedly with the introduction of HDR imaging. We're familiar with the problems of dynamic range in very high resolution sensors and the sensors in current 8K cameras are certainly that – 33 megapixels is a lot for a DSLR, let alone something that needs to offload its frames 120 times a second, as it does for some of NHK's demos (the system more usually runs at 60).

The result is that demos to date have been, if anything, decidedly low in dynamic range, almost to the point where an HDR version simply seems to have achieved normality by comparison. Certainly, the 8K HDR demo at IBC2015 did not have the punch and dazzle of Dolby's lower-resolution, higher-brightness showings, although naturally there are many points between camera and display where dynamic range might be lost simply through configuration choices. Ultimately, it will become trivial to transport and process frames which are 8,000 pixels wide. It is less clear that extremely high resolution sensors can ever become sensitive and quiet enough to do 8K really well.

Something that could have been in the futures pavilion was Canon's high-sensitivity ME20F-SH camera: 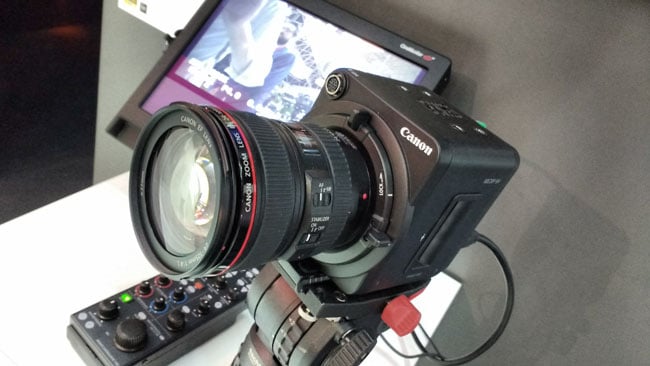 Our recent article on this device is well worth a look; for many, it will be the first time they've ever seen the motion of the Aurora Borealis in real time. At the show, Canon was cautious to control expectations, on the basis that the finished camera is likely to be rare and expensive, but this, along with its 8K cinema announcement and demonstration of HDR suggests that the company has, to understate the case, been busy.

The inexorable rise of IP

The final future prospect that's worth mentioning is the gradual rise of video over IP – that is, sending pictures down Ethernet cables as opposed to SDI lines. This year, as last, the show was strewn with promotional literature proclaiming loudly that “SDI must die!”, and while that isn't going to happen overnight it's traditionally been difficult to resist the inexorable rise of generic IT infrastructure over application-specific technology. There are essentially two reasons to do this: first, because IP creates an addressable network as opposed to a simple point-to-point link, which at the very least frees us from crosspoint routers which limit us to talking to one thing at a time. The second reason is simply cost, and while the very highest performance Ethernet standards are probably more expensive than SDI at the moment, that's likely to change.

It's important to realise that some of the things that are being said about IP are, to be fair, somewhat forward-looking. If we're to send uncompressed video over Ethernet, that's 1.5, 3, or exceptionally even 6 gigabits per second per signal, meaning that even ten-gigabit Ethernet will struggle to carry more than a few at once. 40-gigabit Ethernet is just round the corner. The alternative, which is really required to realise lots of the routing and cost advantages that are currently being discussed, is to compress the picture, costing quality and creating delay. This matters mightily for some applications and not at all for others, so long as, for instance, the delay from every camera on an OB truck is the same. There's also something of a standardisation process at work.

Various approaches are already being promoted with varying degrees of compatibility. NewTek's NDI standard, shown working as part of their Tricaster system, votes decidedly for flexibility, applying a degree of compression to make a lot of things possible over networks that probably already exist. Blackmagic showed prototypes of its Teranex Mini converters, which are intended to support both 12-gigabit fibre SDI and 10-gigabit Ethernet transponder modules for maximum flexibility. At NAB, Grass Valley referred to video-over-IP as "SDVN", for software-defined video networking, perhaps in reference to the benefits of routing and long-distance transmission flexibility. Then there’s Sony’s IP Live which is gaining some substantial cross-industry support, the EBU-backed LiveIP Project and more. And the DVB is investigating open standards for transmitting 4K over IP, with a concentration on multicast and adaptive bitrates.

The best advantage will be had from these systems once they can work together, but it will probably be another year or eighteen months before it becomes clear exactly how that is going to happen and which solutions the industry wants to move forward with.