4K lenses. What does that even mean? 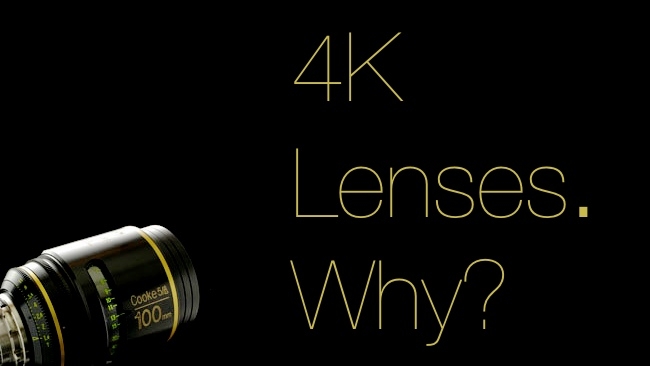 When it comes to dedicated lenses and 4k, lots of people have an opinion. One that’s probably worth listening to more than most, however, is that of Cooke Optics chairman, Les Zellan, who tells Andy Stout that he’s not impressed

Cooke Optics has been in the lens game for 100 years now, and has the sort of track record that means the company can say it was in the Antarctic with Scott and Shackleton on the one hand, and is right at the forefront of modern lens technology with its /i series on the other. It has serious pedigree in other words, so when its chairman, Les Zellan, casts a jaundiced eye on developments taking place in the industry it’s normally worth at least asking why.

“It’s a complete red herring,” he says of the 4k lens for 4k shooting debate. “Let’s talk about film and a good modern, negative. Most people rate good modern negative film conservatively at 6k and more conventionally at 8k. When was the last time you heard someone say I can’t use this Cooke/Angenieux/Zeiss film lenses to shoot film? It’s just a marketing thing.”

Indeed, the company has a white paper on its site which goes through the numbers in as much detail as anybody would ever want.

“The answer to the resolution required for 4k is something just under 40 line pairs per millimetre,” says Zellan. “We’ve pulled on-axis over 200 line pair, and the only reason we don’t know we’re not pulling more is that our reticle only goes up to 200 line pair. But even on those numbers that means our lenses are good enough for 20k.”

He does admit that there may be coverage issues, either as chips get bigger and bust out of the old 35mm format (most modern lenses cover a 30mm diagonal) or when using older lenses (which normally covered 27.2mm as the sound was historically recorded at the side of the negative). “But, that said, you just don’t have a resolution issue,” he avers.

Then again, Zellan is not the greatest proponent of moving towards higher resolution shooting you will ever find.

“I’m relatively confident that 8k isn’t anything that people will want to work in as an artistic medium,” he says boldly. “You have to look at what people are doing today; they’re looking for the old Panchros, the old Zeiss lenses. People are discovering that resolution isn’t everything, it’s about the look. You’re telling a story, you don’t necessarily want to see the zit on the guy’s arse."

“At the end of the day, you’re an artist; you don’t want a machine’s vision. 8k will be great for machining, looking for defects on the production line and so on. But will it be great for making a movie? Even in 2k and 4k people are looking for things that make the film look less digital.”