The next iPhone could have 4K video recording 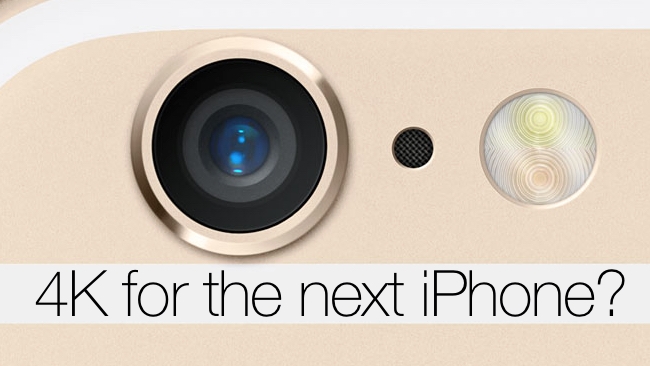 Will the next iPhone camera have 4K?

It's that time of the year again when we repeat all our previous speculation about whether the new iPhone is going to shoot 4K video.

In that sense, this is a pretty valueless post, because we don't actually know anything, except for articles like this one, which is itself only speculation, albeit from a reputable source.

But this time, it's different, because the iPhone's camera is already very good. It's not professional, but if it's the only thing you have with you it will do a very creditable job.

I've been astonished at the way you can shoot pictures and video with such a small sensor, lens and aperture. It's only when you realise that Apple is just about the world's biggest company, and that they will have more people researching how you can make great pictures with a telephone than anyone else.

The thing is that the current iPhone is at a standard where you can use it for most things. I would certainly make a video podcast with it, and, suitably lit, I don't think many people would know it wasn't taken with a professional camera.

But if the rumours and speculation are right, then the next iPhone, to be announced on September 9th, will have a much better camera.

This will take us into unknown territory.

We will have to wait to find out how big a practical improvement this will make. There is talk of a 12 megapixel sensor. This invites comparison with a Sony A7S, but, really, we shouldn't go there. The A7S is a full-frame sensor, and it's probably many, many times the size of the next iPhone's.

But what we don't know is what kind of cunning processing Apple is going to do to the signal coming off the sensor. We don't know what cleverness there will be in the lens design.

Apple has made a very big deal of the quality of the pictures from their current generation of phone. They've shone a spotlight on themselves and built up expectations.

So it's almost inconceivable that they won't put a very impressive and significantly improved camera in the new iPhone.

One thing we should, perhaps, expect, is 4K. In some respects, this is a bit of a yawn, as just about every new camera these days has this ability. It's certainly not new to phones: Samsung's Galaxy Note 3 had it a couple of years ago.

But then, this is Apple.

There are a few quite important implications if we do get 4K with the new iPhones.

First, it is likely to be at least quite good.

Second, it might mean that Apple is about to up its game with other products. Maybe a 4K Apple TV? (Not in the sense of a full TV product, but a bigger, better, Apple TV streaming device), 4K Cinema Monitors? A 12" 4K iPad (pretty unlikely - more likely to be "mere" Retina resolution). Maybe we'll see a 17" Macbook Pro with a 4K screen? (This, to be honest, is just wishful thinking!).

But the biggest thing of all might be the way the camera is set up. The question is: will 4K be the default setting for video? If it is, expect 4K to go into orbit.