Apple's next "A" processor could make tablets as powerful as laptops 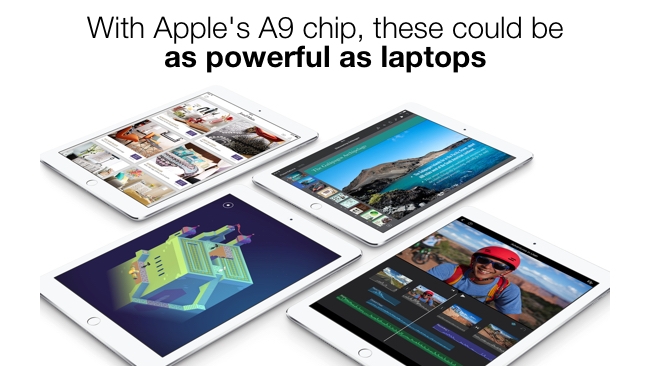 iPads could be as powerful as Laptops

Just how powerful is the new mobile processor from Apple going to be?

You can forgive us for indulging in the occasional bit of speculative writing about Apple. A very high percentage of our readers are Mac users professionally, and what the company does is just downright interesting, whether you're an Apple user or not.

We've been reading that the next Apple processor chip, the A9, is likely to be substantially more powerful than its predecessor. There's absolutely nothing surprising about that but a recent article in 9to5Mac puts it in perspective with other computers and devices, and it's quite illuminating.

We recommend that you read the whole article, but the gist of it is that iPhones and iPads based on the new chip will be on a par with entry level iMacs and perhaps the Macbook Air from around four to five years ago.

That might not sound terribly impressive, but, remember, these computers were perfectly viable general purpose machines just around a thousand days ago. When you realise that any processor in a modern phone or tablet not only has to do everything that a laptop does but also probably power a very high resolution screen as well, it is an impressive feat. I'm typing this on a 2011 vintage Macbook air and there's nothing about it that seems slow (except for video editing!). It's helped, of course, by not having a spinning hard disk - it's all solid state.

9to5 Mac makes a very good point, which is that we are reaching a stage where there's little need to increase the processing power of our mobile devices, and research budgets might be better spent on increasing battery life. Very few people would want for a shorter battery life in exchange for extra speed that they don't need.

Just a final thought: We've often speculated about a 12" iPad. The new A9X chip (again, this is not confirmed), will be a powerful beast, ideal for this larger tablet.

If it is large enough, and powerful enough, it will be a very likely target for some professional media applications, because, don't forget, it will have a retina screen. If I had some money I didn't mind losing, I'd bet that it's going to have a full 4K screen, too.