One day, soon, we will have 11K screens on our phones 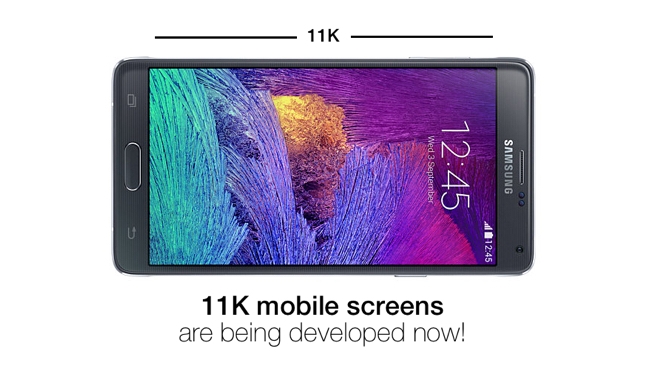 Mock up of 11K display

11K resolution on a mobile phone? Isn't that just ridiculous - or just plain impossible? The answer may just be "no" to both of those.

Hmm. Well. I'm really not sure quite what to make of this. I've seen this report from the Korean site ET News that Samsung Display is developing an astonishing 11K display for mobile devices. Feeling slightly embarrassed that I remember so clearly my excitement at seeing a mobile phone with a VGA display (that's 0.6K in today's language) I do have to wonder whether there's any sense at all in developing a mobile phone with a resolution of 2250 ppi (pixels per inch).

And yet I do find the prospect intriguing. Not least because, presumably, Samsung isn't insane, so they must have a good reason for persuing such extreme resolutions. Maybe they have research which shows that there are tangible benefits. And if they do, we should be interested.

Ever since we started going digital, there have been discussions around resolution. In audio, the question is one of how high the sample rate needs to be. The 44.1KHz sample rate used on CDs was chosen because, at around twice the limit of human hearing, it can reproduce all the frequencies that we can hear.

But some people think that's not the whole story, because the stuff you can’t hear - frequencies above your hearing range, still interacts with other stuff you can’t hear, possibly to make stuff you can here. What if two high frequencies “beat” together to make a tone that is back in the audio spectrum? Maybe that happens all the time in nature? And if it did, wouldn’t that be a strong argument for reproducing higher frequencies than we can hear naturally?

There’s a related argument with film. Maybe you can’t actually see the shape of the grain in film, but if you could store that information digitally, maybe you would be closer to reproducing the actual medium. There’s also an argument that the natural (i.e. irregular) shapes of grains of film naturally “dither” the material so that when we record it, there is more information in it than the sampling frequency and resolution would suggest (we explained all that here some time ago).

So, does any of this apply whatsoever to a smartphone screen? It might.

for a start, square pixels are quite bad at reproducing diagonal lines. The closer the line to the vertical or horizontal, the bigger the problem. One way to mitigate this is to have smaller pixels. With an 11K screen, the pixels would be so small that you’d almost never see the aliasing.

And perhaps, even though it wouldn’t be immediately apparent, this apparently “transparent” way of digitising and displaying images might just shed all the consequences of the digitisation process. At some point, digital must become as good as analogue. And maybe this is that point.

Maybe the Samsung engineers know something that we don’t. Or maybe it’s just a hunch.

Don’t forget that they’re probably not doing this so that they can display video in real time. It might be more to do with text and diagrams - like maps.

Rather enigmatically, the (obviously translated) article suggests that at such high resolutions, images look almost 3D. I’ve heard this in respect of 8K and 4K screens too.

I can’t think of any way that this would work. For proper stereoscopic 3D, you need to be able to reproduce a separate image for the right and left eye. You don’t do this by just having more pixels.

No, I think what they mean by this is simply that the images are so good and so solid, that they look like the real (3D) think. I don’t think that this is a technology for stereoscopy.

But, even so, given that this is a long term project, and that there are some benefits that we can see immediately, and some that possibly only Samsung knows about, we’re very excited to see this come to fruition.

And isn’t it exciting that while most people can’t get their heads around 8K, we’re already talking about 11K resolutions?