The iPad Pro is coming soon. Could it become a powerful production tool? iOS9 has some clues 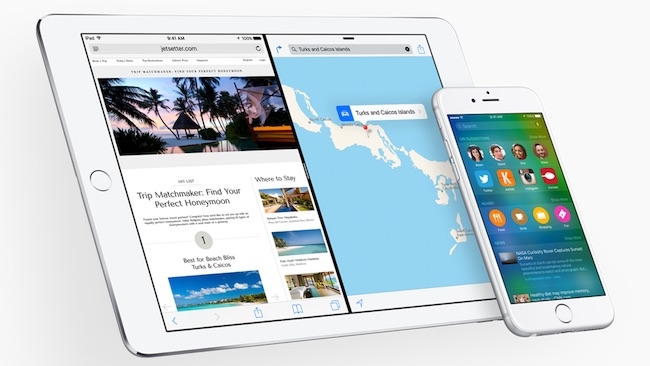 A higher resolution, bigger iPad could be the perfect device for creative people to work with. And according to our in-house Apple expert, K.Stewart, the new iOS9 Beta gives us some decent clues about it.

The once popular idea of the iPad as the future of personal computing has started to feel dated. Its once phenomenal sales growth has entered decline, while large screen smartphones and iPad-size laptops such as the Retina MacBook and Dell XPS 13 have narrowed its appeal.

Since 2013, rumours have been circulating about a 12.9-inch screen iPad Pro, roughly comparable in size to a 13-inch MacBook's screen but with the familiar iPad aspect ratio. The supply chain has leaked parts, third-party cases have appeared and in the strongest indicator yet, iOS9 itself contains support for a new soft keyboard scaled to a larger screen with a likely resolution of 2732 x 2048 at the same 264 PPI as other Retina iPads.

The design seems a straightforward scaling up of a thin bezel iPad design with no particularly novel elements. Stereo speakers at top and bottom, a Bluetooth stylus accessory and possibly even USB-C in addition to Lightning are subtle refinements to a proven design.

According to DigiTimes, Apple has placed component orders with Foxconn for delivery in late September. With new iPads traditionally announced in October, iPad Pro seems on track to ship mid-November. Although OSX El Capitan has been trademarked by Apple for tablet use, we have no doubt iPad Pro will be running iOS9. So the question is, can a mobile phone OS really match up to professional needs?

Multitasking and split-screen operation have long been something of a Holy Grail for the iOS UI, desirable features that have long been inimical to the single-screen, single app approach that originally defined iPhone OS and made it's all-day battery life possible. Prior to the iPad's launch, Microsoft had poured millions into J. Allard's Courier project with a physical dual 7-inch screen, only to axe it in favour of the Surface project and Windows 8's Touch friendly UI and a Snap View for split-screen apps.

Three years after Windows 8, iOS absorbs this approach in a refined upgrading of the whole multi-tasking interface. In iOS8, a home button double-tap summons a horizontal app selector with each running app represented by a card - an app snapshot that is often quite dated. iOS9 makes the cards bigger and the images seem more up-to-date. Consequently, you can flick between your main app, read from another app card without selecting it, then snap back to your original app. Because the cards overlap, the size increase doesn't affect the speed with which you scroll between them and overall the selector is, at last, elegant, effective and on a par with desktop equivalents.

Entirely new (to iOS) features are Slide-Over and Split View which sound similar but are distinctly different in functionality. Using Slide-Over, you sweep from the right of the screen to access a vertical app selector, currently limited to about 20 core apps, including Calendar, FaceTime, Contacts, Mail, Notes and Safari. In this beta phase, the iWork office suite and iMovie are notably absent.

Unlike App Selector, the narrow Slide Over view relies upon App icons - recently used apps sometimes get a snapshot behind the icon, but the view is so small it's of negligible use. Once you click on an App, it expands out to about a third of the screen and is fully interactive. Despite the relatively small size, it's easy to do a bit of email triage and snap back to your main app. Or you can zoom in, highlight some text, copy into clipboard and then move back to the main app.

In Slide Over, the main app can be anything, but the secondary app must have a responsive design and enable the feature. XCode makes Slide Over view a default setting for new apps and, with modern responsive designs, adding it to existing apps shouldn't be difficult.

Split View is activated by simply pushing the Slide Over divider to the middle of the screen. On iPad Air 2 only, this makes both apps fully interactive. The main app isn't paused, as in Split View, so you can freely move between the apps. However, Split View requires both apps to be responsive design and to have enabled the feature.

Despite a 9.7-inch screen being relatively cramped by laptop standards, the view is well thought out and genuinely useful. In fact, it's no surprise that Apple have brought the feature over to El Capitan as well. On OSX, manually arranging windows is a standard feature, but Split View makes it simpler, less fiddly.

All the little things

iOS9 isn't so much about innovation as stability and refinement. There's no sign, yet, of the dynamic tiles popularised by Windows 8, but on iPad iOS8 offers a bump from a 3x3 display grid for App folders to 4x4. Put another way a single row of 6 folders goes from 54 Apps to 96 Apps. For a simple visual representation of all your most important apps, this is simple but significant.

Even more minimalistic in design is a simple 'back to (previous app name)' pop-over at the top left of the screen when one app has launched you into another. It won't win any visual design awards, but it's a significant usability advance that again makes iOS easier to work with.

Harder to judge right now is the pro-active functionality added to the Search screen. Swipe left and, after a day or so, you'll start to see the area under the Search box populated with your most recent contact and apps, search icons for nearby locations and even local news. Over time, this could know you well enough to favour Microsoft Office apps during the day, Twitter and BBC iPlayer in the evening. Apple is insistent this Google Now-style monitoring is all done on device (for privacy reasons), but only time and individual usage will tell if this can become invaluable.

The iPad is the sine qua non of second screen devices, the perfect device to browse on during the adverts. But how about using it to drive your main screen? Via AirPlay with Apple TV or cabled with a Lightning HDMI adapter it's a mixed situation. iTunes movies and iPlayer snap to fullscreen and play at full resolution. Both PowerPoint and Keynote automatically offer a presentation mode, filling the main screen and offering notes and a virtual pen on the iPad to highlight. Outside of these obvious applications, however, the iPad defaults to simply mirror the iPad's resolution so Pages or Word display in a 4:3 format with severe letterboxing on a standard widescreen monitor. A vertical Word doc isn't so bad, but a sprawling Excel spreadsheet suffers significantly from not using the entire screen.

iPad Pro will itself have a bigger screen, of course, but only comparable to a standard laptop which most people have hooked up to an external monitor. Plugging a mobile device into one of these screens is an obvious step in replacing conventional PCs, and Microsoft's Surface line-up launched with a range of docks to fit exactly this requirement. Right now, the iPad's Lightning HDMI adapter is a poor substitute for anything outside the most narrow niche applications. In theory, responsive design could make full use of a second screen the norm rather than the exception, but right now there's no sign of that happening.

Apple's iWork and iLife apps were degraded on OSX as part of rebuilding to support cross-platform, including online, sharing of file formats. The resurgence of Mac sales has put an end to talk of OSX being replaced by iOS, but Apple continues with a strategy of sharing frameworks between both OS's with iOS9's introduction of Extension Points that will make it easier to have a third-party app provide functionality inside another app. This is particularly popular with pro audio apps, where Audio Unit plug-ins can now be developed for both platforms. Previous headaches with iOS with no visible file system and restricted plugins are being lifted, so a rich professional eco-system of extensions and plug-ins is finally plausible.

Despite being beta software, and not recommended for your main machine, iOS9 is surprisingly stable and what the additional functionality lacks in innovation it more than makes up for in its usefulness. Springboard aside, iOS7's UI looks modern and is increasingly refined, while the share sheets introduced in iOS8 are now well enough supported to make sharing content between apps vastly improved, if not yet flawless. The new iCloud app enabling direct access to the file system will further enhance functionality once developers get to grips with it.

Is all of this enough to make iPad Pro a serious proposition? There's a big price differential between an entry-level 16Gb iPad Air 2 at £399 and a new MacBook at £1,049, even if you factor in a £50 external keyboard. A 64GB Surface Pro 3 starts at £639 with the cheapest Surface keyboards starting at over £100.

Enlarge iPad Pro's screen size however, double the speakers, add a stylus and maybe a USB port and the price differential will narrow. A Pro machine will not succeed by simply being marginally cheaper. And Multi Touch Office is good but far from being on a par with its desktop version, not even the recent Mac version truly achieves that after all. To succeed, iPad Pro will need to carve out a market position with apps that aren't just useful adjuncts to desktop versions. The IBM partnership is undoubtedly part of the equation, while Multi Touch has already made iPad a natural home for pro audio with an incredible range of synthesiser apps. Given what artists like David Hockney have done with the existing iPad, the addition of a high quality digitiser, similar to featured on Surface, could make iPad Pro 'must have' amongst the creative community which has always been the company's core market.

iOS9 does not make the iPad exciting again. It does, however, make it interesting. It's not yet a peer to desktop equivalents, but the gap has been reduced significantly. If you take the long view, Apple's Macs are basically Apple PCs built around pricey Intel CPUs, whereas iOS devices use Apple's own inhouse designed chipsets innovating at a phenomenal rate. This, more than anything else, indicates iOS will challenge the Mac line-up directly sooner or later and right now almost all the pieces are there for it to happen in 2015.