How to take a photograph three billion miles away 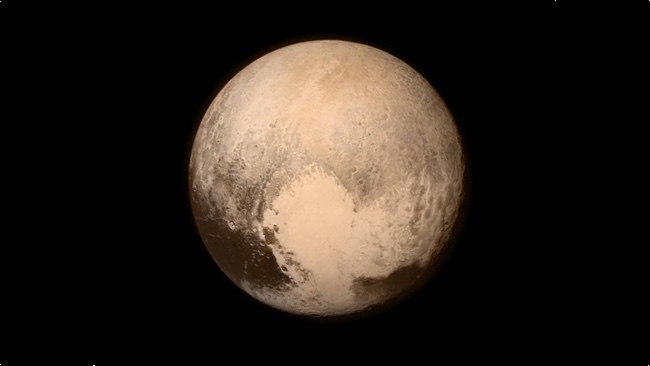 Photographing Pluto. Pretty much everything about NASA’s New Horizons Mission and its recently completed 28,000mph fly-by of Pluto is astonishing, including the cameras.

New Horizons launched in January 2006 and, following a gravitational slingshot and comprehensive system test as it swung past Jupiter just over a year later, has been in hibernation mode to conserve power for most of its long journey into the outer reaches of the solar system.

It has got three main imaging systems onboard: LORRI, Alice and Ralph.

The Long-Range Reconnaissance Imager (LORRI) is a long-focal-length imager designed for high resolution in the visible spectrum and is the instrument that has done most of the grunt work in the build up to the flyby. It couples a 1K monochromatic CCD imager, designed to work at sub 70 degree centigrade temperatures, with a 208.3mm (8.20in) aperture, for work at low light levels.

And low light is precisely what it has. Pluto is 33 AU from the sun and the illumination levels are approximately 1/1000th of that found in Earth orbit. Happily, Pluto also happens to be unusually bright, between 1.3 and 2x brighter than Earth in fact, with an albedo of ~0.55.

If all has worked perfectly a three-day mapping campaign will have enabled it to obtain four complete colour dayside maps of Pluto at a maximum of 1.6km resolution. Oh, and if you really want your jaw to drop, consider that it does this it does this with a designed exposure range between 50 and 200 milliseconds…

Joining LORRI on the imaging front is the PERSI (Pluto Exploration Remote Sensing Investigation) platform. This consists of the 6cm Ralph telescope, which is providing broadband and colour channels in the visible light spectrum as well as near infrared imaging spectrometry (and whose lower res data was merged with LORRI’s to create the above, now iconic image); and the Alice instrument, which will provide ultraviolet imaging spectrometer capability to resolve wavelength bands in the far and extreme ultraviolet range.

Even imaging sensor manufacturer e2v, which after being involved in 150 space missions including Rosetta is probably used to this sort of thing, describes Ralph as ‘highly bespoke’. The sensor is in fact seven different CCDs made on the same substrate, providing a complete focal plane within a single sensor.

But then, the whole mission has had a bespoke edge to it. The first pictures of Pluto and its moon Charon have been astonishing. What’s more we still don’t know what most of the data it has collected shows. New Horizons flew past the dwarf planet on the 50th anniversary of the first successful American pass of Mars by the Mariner 4 spacecraft in 1965 and, if all of its systems worked perfectly, has gathered 5,000 times as much data at Pluto than Mariner did at the Red Planet. NASA’s Deep Space Network system will get that data back to Earth at approximately 2 kilobits per second, and it’s going to take around 14 months for all that data to be downloaded.

The probe’s next stop is the Kuiper Belt, and an object tentatively named 2014 MU69, which it will reach in January 2019 after a final decision is made on a Kuiper target next month . LORRI will have yet more challenges to overcome, as 2014 MU69 is 43-44 AU from the Sun, the illumination will be still lower, and the typical albedo of a Kuiper Belt Object is ~0.1.

After that, it’s a slow journey (in terms of time that is, New Horizons will actually be travelling at 29,000mph) out of the heliosphere and into interstellar space. It is currently estimated that its nuclear fuel will decay to the point where it will fall finally silent — apart from intermittent heliosphere data collection — in 2026, some two decades after launch.

But what a journey…