New technology: Have we lost the ability to tell what is good and what is bad? 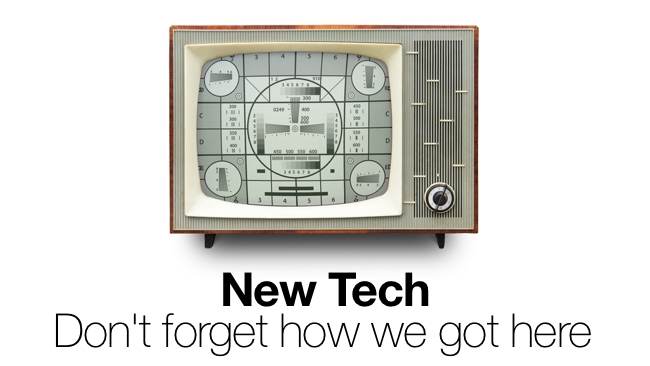 New Tech - don't forget how we got here

Modern equipment is so good, and so cheap, that it is distorting our sense of what is good and bad.

There is so much good technology available today at low prices that it is distorting our sense of what is good and bad. With cameras available for a few thousand pounds that were ten or fifty times that just ten years ago, and with studio quality audio hardware available almost at pocket money prices, we are in danger of being over critical instead of - dare I say it - grateful that the extremely tangible benefits of Moore's law make things better and cheaper with every passing day.

At the risk of giving away the extreme magnitude of my age, I was experimenting with digital audio in 1985. In fact, I was a partner in a project to design one of the world's first digital mixing consoles that was based around DSP (Digital Signal Processing) chips.

This stuff was difficult back then. In fact, it's hard to explain just how difficult it was.

Audio, with its lower data rates, is easier than video to process digitally in some ways. In other ways, it is as or more difficult, because you can have ninety-six channels and a single glitch in an hour long recording on any of those tracks can ruin the whole thing. But processing a single or stereo stream of audio is relatively simple - now.

You couldn't do it on a desktop chip

But it wasn't back then. You certainly couldn't do it on a desktop computer chip. If you were lucky, the best you could do with your 8086 or 80286-based computer would be to make it bleep. In any case, there was no suitable I/O available. The first sound cards for PCs were resolutely 8 bit, and while they may sound charmingly vintage now, they certainly weren't good enough for professional use.

We based our digital mixer around DSP chips made by the rather confusingly named Analog Devices. The chip in question was the ADSP 2100, a general purpose DSP designed (I'm told) for applications like modems, where they were used for echo-cancelling.

My schoolfriend had been working for a modem company and had become familiar with the workings of the DSP chips. And then it occurred to him that we could make a digital mixing console using the same devices.

We built it, and it worked. It was rather large - the digital electronics were in a rack about the size of a telephone box, and each channel had its own board. But it mixed in real time, with EQ and delay on each channel. It would have done more had the project not run out of time and money and - hardware - because those early generation DSPs weren't up to the job of mixing pro-quality audio, at least not in the designs that were capable of it at the time.

Looking back at that now, it's easy to wonder whether we even knew what we were doing. I wonder myself! But what we did know is that doing digital media back then was incredibly difficult, and impossible without very dedicated, very specialist hardware.

Multiple channels of audio on a PC

I quickly decided that I would have a much easier life if I sold digital audio equipment instead of designing it. So I teamed up with a company from near Seattle called Spectral Synthesis. They'd figured out a way to edit and mix multiple channels of 16 bit audio on a PC. It was a really cool product that did things in real time that would take another decade for a PC to do using its own processor.

So how do you edit and mix multiple channels of CD quality audio on a computer that can barely bleep on its own? Well, essentially, you don't. What you do instead is use the computer solely for a power supply and a user interface, and do all the hard work in specialist hardware. The pre-PCI bus was nowhere near fast enough to do, well, anything useful. So this system had its own synchronous digital audio bus that ran at 256 times the sampling rate. This meant that you could make around 256 connections between various tracks and routing points. And because it all happened in real time, you knew it was going to work without glitching.

Various plug-in boards handled the signal processing, sampling (there was a dedicated sampler board) and SCSI I/O (these were the days when SCSI cables were the size of radiator pipes).

I distinctly remember buying an external SCSI drive for £2,700. It was 1GB.

The boards were connected along the top by a ribbon cable that was the physical side of the digital audio bus. It was one of the first examples of a so-called TDM (Time Division Multiplex) bus for digital audio in a PC.

The system worked wonderfully in a way that it had no right to given the current state of the art, but, as I said, it was no thanks to the host PC, which was as slow and cantankerous as you could imagine.

Nevertheless, the Spectral system was robust and useful enough to be used for track-laying work for films. One of its major successes was when it was used for the sound track to Aardman Animation's "The Wrong Trousers". This was stop motion animated film that established the careers of "Wallace and Gromit" and precisely because it was an animation, there was no location sound at all - so it all had to be created in post. The actual soundtrack was incredibly detailed, with up to 80 virtual tracks in use. The film was dubbed by syncing the Spectral system to the dubbing theatre's timecode, and (pretty much) followed the back and forth of the dubbing mixer's activity perfectly.

(You might not know that Spectral was bought by Euphonix, which was later acquired by Avid).

Fast forward ten years, and computers start to be able to process digital audio natively (ie without plug-in DSP processors) and then again to today, when we can run an entire virtual recording studio - complete with effects and massively authentic mixing desks) in real time on a laptop.

Products like iZotope's RX4 can even do things that are not supposed to be possible, like treating sounds within a mix as objects and removing them without trace, or un-clipping clipped audio. Again, this is without any special hardware; it's all down to the power of the PC or laptop that it's running on.

The effect of this is miraculous. Want a new synth? Go to a menu and select "create". The old version of this is that you would miss a mortgage payment or even (happily) sell your grandmother to raise the money for a new keyboard.

With such an abundance of processing power, it's easy to get normalised to the idea that you can do anything. If you don't remember the early days of the digital audio and video revolution, then you won't necessarily have a frame of reference on which to base your assessments of modern equipment. If you're also normalised to the exponential rate of change in technology then you may find you have a "sense of entitlement" that means you expect or require rapid advances all the time. Whether or not that's a reasonable view it does make matters very hard for manufacturers who are compelled to bring out radically new products all the time without necessarily improving existing ones or focusing on aspects that are not about sheer technical brilliance but which might be equally important like ergonomics or improved colour science on existing devices.

It's not just end users who demand a steady parade of new products, ironically it's manufacturers too. It's no good for them if they make a product that's good for the next twenty years. But that's not a new problem. Car manufacturers know all about this!

Distorting our sense of what is good and bad

So, to return to the statement at the start of this article - that here is so much good technology available today at low prices that it is distorting our sense of what is good and bad - we should perhaps remember that even the very cheapest digital cameras are better than the most expensive ones of a very few years ago. So a new camera that, perhaps doesn't perform outstandingly in low light, shouldn't be written off for that, because it is very likely to be as good if not better than one that was ten times the price a very short time ago. But it might have other qualities that make it shine over and above its competitors.

We are truly living in an age of abundance. The digital equipment available to us today would have looked like science fiction only ten years ago. Think of the sort of digital video recorders that you can buy from the likes of Atomos, Sound Devices and Convergent Design: these little wonders can do everything an HDCAM deck could do, but better, in a fiftieth of the space, a fiftieth of the weight and a fiftieth of the price. This is going on everywhere that you find digital electronics. The same doesn't apply to lenses and audio input and output - but these costs are at least constant.

So I'm not saying that we shouldn't be pushing manufacturers for better products: of course we should; but maybe we should be asking them to improve aspects like durability, ergonomics and usability, rather than going for the headline specs which, realistically, don't need to be pushed much further, just for the sake of it.