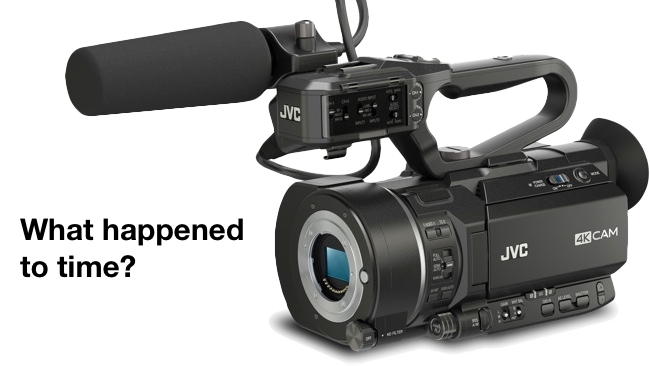 What happened to time

Where did all the time go?

We live in interesting times, and, mostly, it’s not a curse but an exhilarating ride through a vista of new products and technologies. The pace is too fast for some, and others say that machines will soon become sentient and want to destroy us, the inferior species.

Well, let’s hope that doesn’t happen for a while because we have more new cameras to play with than we ever have. For the price of an small Audi, you can buy camera kit that will make films that you can show in any cinema. And you can get started for a tenth of that.

Just fifteen years ago you’d have had to use a consumer camcorder with a small digital sensor (most likely three of them and a prism beam-splitter) and record to tape. It was digital but in standard definition. While you arguably could show this in a cinema, you’d notice within milliseconds that it wasn’t as good as film. But now the question is often “is film as good as video?”.

So the budget you need to make a film has plummeted - especially compared to even working with 16mm film.

Are we better off?

There are those who argue that we’re not. In the same way that transistor amps don’t (apparently) sound as good as tube ones. Times have changed. It’s just not like the old days.

But in those bygone days the costs were often prohibitive for small film productions, and today’s filmmaking environment would have seemed like a dream. Yes, knowing that film was just so expensive made everyone focus on getting the shot first time, but you could view that as a type of fiscal tyranny that surely nobody could possibly feel nostalgic about.

In a sense, we’re entering a post scarcity era, where there are enough cameras at all levels to suit absolutely any budget. Any financial one, that is.

But there’s another budget, where there’s still scarcity. It’s time.

Yes, in theory you can turn things around faster now. You don’t have to wait for film to develop. Editing can be faster. Except, that is, when you have a shooting ratio of fifteen to one, and every shot needs CGI elements. And then there’s grading. And multi-channel audio. And other stuff.

Just figuring out a workflow can take days. And why are there so many codecs?

So, yes, we’re living in a land of plenty. And the results can be wonderful. But don’t ever imagine you can get results quickly.