Why not have a single connector for everything on a camera? 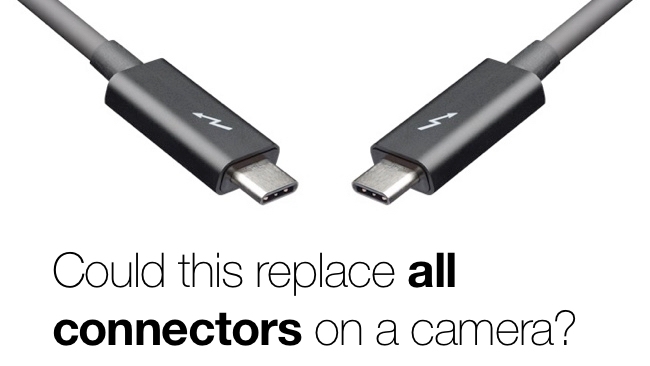 The new, reversible, USB "C" connector opens up the possibility of a single connector for everything

This is just a short note to say "thank you" to our commenter Samuel Burton, for making a rather good point, which is: why shouldn't we use the new USB "C" connector on cameras so that we can power them, control them, and get video from them, all from a single cable.

Samuel was talking specifically about aerial cameras - where this would perhaps make a huge amount of sense, but beyond that, I'm struggling to see why this connector shouldn't become a default on all cameras. After all, I can think of three types of HDMI connector alone (Standard, Mini and Micro).

I'm not saying that we need to ditch standard, dedicated connectors - I very much doubt that professionals used to the locking SDI hardware on their devices would want it to be replaced by such a potentially flimsy connection; but what about a situation where there isn't any SDI equipment available, no battery adaptor or suitable power supply, and no external means of controlling the camera (in whatever respect)?

If anything, the USB C connector would be a fantastic backup for - everything, really. Even 4K at 60 fps.

It would probably add to the cost, but on cheaper cameras it could reduce the cost by eliminating a whole host of other connections.

What do you think? Is this viable or just a flight of fantasy?

And if this isn't the answer, what about a new professional version? A single, robust, locking connector that does absolutely everything?

I think we should at least consider this possibility. It could even change the shape of future cameras - or at least make them much simpler to use and to rig up.

Finally, even if we have one type of connector, there's no reason why we should only have one of them. It wouldn't be great if you had to carry a cumbersome (or even very small) breakout box with you every time you need to connect your camera to something. But even if you had a bank of four or six of the new universal connector, surely it would be a more versatile solution than having multiple types for specialised purposes.