Intel announces Thunderbolt 3 and changes everything 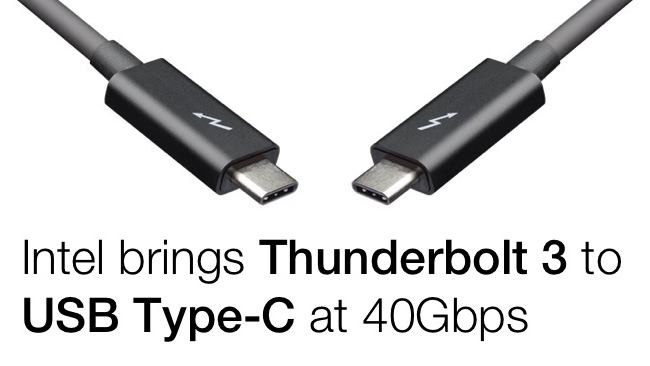 Two may be superfluous...

One port to rule them all. Intel chose Computex 2015 to unveil Thunderbolt 3 and an extremely significant change of connector from Mini DisplayPort to USB Type-C.

“If you’re a business professional, content creator, gamer, or just want to simplify your 4K workspace, your world is about to get faster and simpler,” wrote Jason Ziller, Intel’s Director of Thunderbolt Marketing in a blog post.

And if you have the latest Macbook you’ll no longer have to put up with people looking at your single connection port and giggling either presumably (though it will take a while for the technology to be rolled out to the consumer — perhaps with a Skylake powered Macbook later this year?).

It’s almost the definition of a no-brainer. Computer ports with Thunderbolt 3 will provide 40Gbps Thunderbolt – double the speed of the previous generation while still bi-directional and full duplex — USB 3.1 at 10Gbps, and DisplayPort 1.2, which means that one computer port will be able to connect to Thunderbolt devices, every display, and billions of USB devices.

This is, in a genuine use of one of the industry marketing department’s most currently abused phrases, a game-changer.

Essentially, in Thunderbolt mode, a single cable will provide four times the data and twice the video bandwidth of any other cable out there, while supplying power; 100W with USB Power Delivery spec, 15W without. Not enough to power an external graphics card, perhaps, but most other peripherals will be tidied up into single cable utopia.

It’s driven by Intel's new Alpine Ridge controller, which now features an integrated USB 3.1 host controller, though sadly rumours of HDMI 2.0 support have proved to be wide of the mark and those displays will have to be driven via an adaptor. But the increase in max bandwidth means that Thunderbolt 3 will support up to two 4K @ 60Hz displays or a single 5K @ 60Hz display off a single cable.

There is no official release date as yet, but backwards compatibility to existing Thunderbolt products has been confirmed and will be managed by adaptors.

Even better, at launch, alongside an active Thunderbolt 3 40Gbps cable there'll be a passive one that supports Thunderbolt 3 , USB 3.1, and DisplayPort 1.2, but with a max bandwidth limited to a mere 20Gbps (which is, lest we forget, still twice as fast as USB 3.1). What’s more, this passive cable will be a standard, cheap USB Type-C cable, all of which may finally at long last bring Thunderbolt within the reach of the masses.