Periscope, Meerkat and what live-streaming apps can do for you 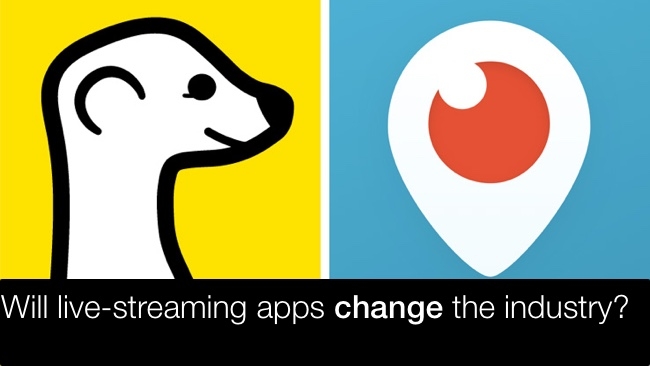 The rise of Periscope and Meerkat has been one of the most significant stories for the tech industry this year, but alongside their already fearsome reputation in online piracy we reckon they have an important role to play for film makers too.

First off, a quick recap for those who may have managed to miss all the fuss. Periscope (now owned by Twitter) and Meerkat are both live streaming apps that are closely linked to Twitter accounts and effectively allow you to broadcast live to the internet via a mobile phone. The quality is, unsurprisingly, nothing to write home about, but their ability to write headlines is.

On the one hand their usefulness in ‘citizen journalism’ is a given, on the other the implications for privacy are worrying, and finally live-streaming’s ability to circumvent all the mechanisms in place to prevent online piracy are second to none.

(Basically, anyone can point their phone at a TV screen and broadcast that content. HBO was vexed when the first episode of the new series of Game of Thrones appeared on multiple Periscope feeds, multiple rights holders were even crosser when the Mayweather vs Pacquiao fight did the same. Unlike other live streaming services, Periscope does not provide tools to let content owners force the removal of copyright-infringing content in near realtime — yet. Instead, they have to file individual takedown requests, which take longer to process, but at least it means that any archived footage on Periscope has been dealt with.)

And here is where we get to the part that excites us. Meerkat has yet to archive broadcasts: when they’re gone, they’re gone, so we’ll leave that alone. Follow someone on Periscope though and you can click through to what has gone before. How much of it and how long it will be up there is one of those factors that is still evolving, but basically it is looking like a decent promo tool that productions can add to their marketing and social media arsenal.

Give a selfie stick (AKA ‘Wand of Narcissus’) to one of your actors in rehearsal, clamp a phone on a camera and point it at the action or back at the crew, do interviews, live Q&As and much more. All of that gets both live broadcasted and searchable archived. Via a Twitter account you can even announce it’s happening. It’s not a gated community like Hang w/ that the Con-Man team is driving so well at the moment, for instance, but it does have the potential to reach a lot of viewers.

And then there’s its use within a production too. It takes a bit of a work around in setting up a dedicated Twitter account as a walled garden, perhaps, but Periscope allows you to broadcast privately to your followers. Given the additional ability for followers to comment live on a broadcast, that could make it a really useful tool for location scouting, setting up shots with a second unit, or any of the other production tasks where quick feedback on a visual feed is useful in a distributed workflow and people are spread about all over the place.

One thing you do notice in nosing around these apps is that it is very early days. People are still finding out how to use them and exactly what to use them for, but you also get the sense that their power to change the way the industry does things — everything from monitor piracy to the POV market — is only just starting too. The quality might be poor, but these apps are putting live video into the hands of more people than ever before. Watching what they will do with it will be fascinating as always.